The Obafemi Awolowo University has broken its silence after a Prof at the university was arrested for fraud. 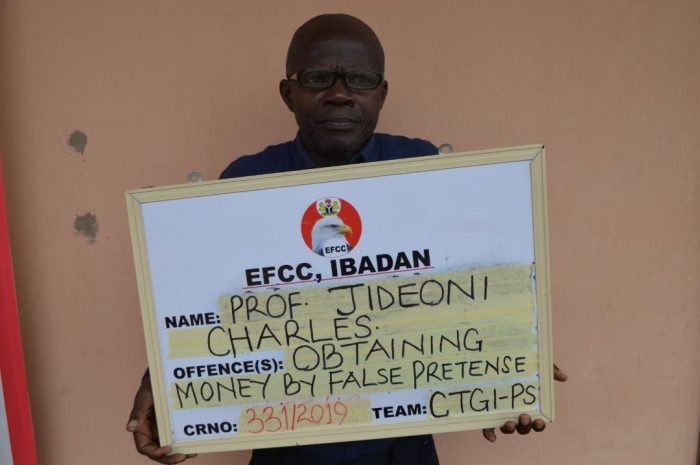 Prof. Charles Jide-Oni
Charles Jide-Oni, who was arrested by the Economic and Financial Crimes Commission for fraud, is not a professor at the Obafemi Awolowo University, as he claimed.
OAU spokesman, Abiodun Olanrewaju, said Friday that the institution has no record of the 60 year-old Jide-Oni.
“Having gone through our records, nobody bears that name, whether a male or a female. We do not have a record of anybody with that name who is teaching or has taught in this institution,” he said, as quoted by an online news platform.
Jide Oni was arraigned before a Federal High Court sitting in Ikoyi, Lagos State on Wednesday for allegedly obtaining money under false pretence and engaging in advance fee fraud.
The Economic and Financial Crimes Commission, EFCC, Ibadan zonal office, arraigned the ‘Professor’ and 12 other internet fraud suspects before Justice Nicholas Oweibo, the Federal High Court vacation judge for the Southwest zone, on Wednesday, September 4, 2019.
Jide-Oni’s arraignment was sequel to the EFCC’s damning findings about the activities of an illegal financial outfit he floated through which he allegedly swindled his victims of several millions of naira.
Some of the victims had earlier written a petition to the Commission which led to the investigations that indicted him in the alleged fraud.
Top Stories