Justice Ngene therefore dismissed the petition brought by the APC candidate, saying the petitioner had not been able to prove his case. 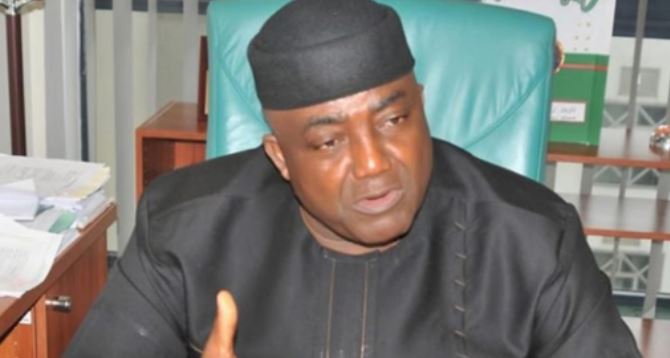 Leo Ogor
The Election Petitions Tribunal sitting in Asaba on Friday quashed the election of Benson Igbakpa of the Peoples Democratic Party as the member representing Ethiope Federal Constituency in the National Assembly.
Halims Agoda  of the All Progressives Congress who contested the 23rd February 2019 National Assembly Election against Benson Igbakpa had approached the Tribunal complaining of gross irregularities by Igbakpa, the PDP, and INEC against him.
He urged the tribunal to cancel the election or in the alternative declare him the winner, having scored the highest number of valid votes cast.
The tribunal presided over by Justice A.M. Abubakar, after listening to the issues raised, declared that Agoda was the winner of the election, and that INEC should issue certificate of return to him.
Speaking shortly after the judgment, Agoda thanked the judiciary for having the courage to right the wrong and commended the electorate in Ethiope Federal Constituency for their support.
Also, the Election Petitions Tribunal, Panel III presided over by Justice E.I. Ngene dismissed the petition brought by Mr Joel Thomas Onovwakpor of the All Progressives Congress against Leo Ogor of the Peoples Democratic Party.
Onovwakpor who contested against Leo Ogor at the February 23, 2019 National Assembly Election to represent Isoko Federal Constituency at the National Assembly claimed that Leo Ogor, the PDP and INEC connived to perpetrate massive electoral irregularities and that the tribunal should cancel the election or declare him the winner for scoring the highest number of valid votes cast.
Justice Ngene therefore dismissed the petition brought by the APC candidate, saying the petitioner had not been able to prove his case.
Monday Igbuya of the APC suffered the same as his petition against the current member representing Okpe/Uvwie and Sapele Federal Constituency, Efe Afe (PDP) was dismissed by Justice Ngene.
Justice Ngene stressed that the petitioner could not prove his as case and that the petition was incompetent and dismissed it.
Top Stories