According to reports, the plane, with 560 pilgrims and 19 crew members on board, made a hard landing damaging the aircraft and some instruments on the runway. 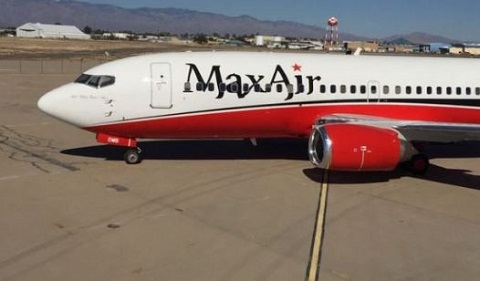 Contrary to wide spread reports, the Chairman of Max Air, Alhaji Dahiru Bara’u Mangal has insisted that his aircraft never crash-landed in Niger State on Saturday.

Alhaji Mangal, in a statement which he personally signed, said unlike what was reported, his aircraft had an “emergency landing” in Minna, the Niger State capital, while conveying pilgrims to the state from Saudi Arabia.

“Actually, it was not crash landing, rather an emergency landing and the reasons that led to it are bad weather and power outage.

“There was no light at the airport when my aircraft reached Niger State and the weather was also bad.

“However, the beauty of the whole thing is that we have not recorded any casualty as nobody was injured or died during the unfortunate incident,” he said.

The chairman added that the aircraft, a Boeing 747-400 series, was also in good condition despite the unfortunate incident and called on its customers to disregard reports of a crash landing in Minna.

According to reports, the plane, with 560 pilgrims and 19 crew members on board, made a hard landing damaging the aircraft and some instruments on the runway.

Already some investigators from the Accident Investigation Bureau (AIB) from Lagos are already in the Niger State capital to commence investigations into the incident.

In a statement released by the Bureau late Saturday, the AIB solicited the support of the public to aid in the investigation by providing it with any video clips or any other relevant information.
Top Stories