Former Nigerian minister, Ezekwesili and leaders of the Nigerian community in South Africa have asked the South African president to apologize over the xenophobic attacks. 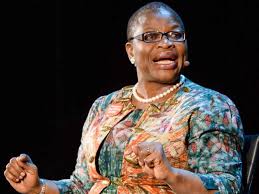 Ezekwesili
According to a report by Punch Metro, the presidential candidate of the Allied Congress Party of Nigeria in the 2019 election, Dr. Obiageli Ezekwesili and leaders of the Nigerian community in Cape Town have called on President Cyril Ramaphosa to apologise to countries whose citizens were attacked during the xenophobic killings in South Africa.

The meeting held on the sidelines of the World Economic Forum in Cape Town, South Africa, comprised Nigerian entrepreneurs, professionals and the Nigerian community led by the acting President of the Nigerian Community Western Cape, Cosmos Echie.

Other members of the delegation that met with Ezekwesili were the representative of Yoruba community in Cape Town, Chief T.A Odutayo; chairman of Ohaneze Ndigbo (Western Cape), Chief Vincent Nzekwe and Secretary, Simon Odumegwu.

Others included the leader of the Ogoni community, Pastor Barry Wuganaale; current Financial Secretary of NCWC, Fuster Ludjoe; Treasurer of NCWC, Felicia Feni, Ebiere Joseph-Akwunwa, Chukwudi Nwokeabia, Samson Famuyiwa and Sunday Ekene.
Ezekwesili and the Nigerian community in South Africa, according to a communique issued after the meeting and obtained in Abuja on Monday, described the attacks as Afrophobia.

“It was unanimously agreed that the crisis is detrimental to the spirit of African renaissance, affirmation of black heritage, progress and development. Afrophobia compromises everything that the recently brokered Africa Continental Free Trade Agreement represents and aspires to deliver,” the communique stated.

They urged governments of Nigeria and South Africa to guard against provocative comments.

While demanding an apology from President Ramaphosa, they called on South African government to trigger a series of actions necessary to de-escalate the brewing conflict to ensure that bilateral trade agreements between the countries would not be affected.

The communique reads, “Officials of the government of South Africa must immediately desist from making any further pejorative and incendiary comments targeting Nigerians and their country and instead publicly commit to taking preventive and surveillance measures that will foreclose a repeat of Afrophobic attacks of Nigerians and other African nationals.

“The President of South Africa, Cyril Remaphosa, should rise to the demands of leadership and reach out to the President of Nigeria to trigger the series of dialogue and actions necessary for swift de-escalation of the brewing conflict between their two countries.

“The President of South Africa should offer a sincere public apology to Nigeria, other countries affected by the attacks and the entire continent for the tragic hostility and harm perpetrated against their citizens.

“The President of South Africa should send a sharp signal to South Africans and the continent by visiting the victims of the Afrophobia attacks to empathise with and reassure them of their safety in South Africa and the government should consider paying compensations for losses sustained in the attacks.

“South Africa and Nigeria should agree on a mutual legal assistance cooperation scheme for tackling cases of crimes occurring among their citizens. The Nigerian High Commission and Nigerians in South Africa should design a fact-based campaign to widely convey the accurate and positive narrative of the value they contribute to their host country. For example, South Africans must be made aware that more than 18 per cent of lecturers in their higher institutions are Nigerians.

“A significant percentage of medical personnel in rural hospitals are Nigerians. Most Nigerians and Nigerian-owned businesses operate responsibly in legitimate and professional practices in South Africa compared to the less than one per cent of cases of shadowy activities.

“The Nigerian government should make visible effort to guarantee the safety and security of South Africans and their businesses in Nigeria. The umbrella organisation of South Africa-based Nigerians will be encouraged to launch a business platform to support the formalising processes for as many informal businesses of Nigerians as possible in order to better capture the value and impact being created and contributed to South Africa’s economic and social landscape.”

Ezekwesili promised her expertise in personally working with the NCWC to ensure that their goal to help achieve the formalising platform. The leaders of South Africa-based Nigerians will collaborate to  promote a citizens diplomacy  programme to foster stronger personal and business relationships between Nigerians and South Africans.”
Top Stories