Police have arrested nine suspected cultists who had been on their wanted list at Imota, Ikorodu area of Lagos State. 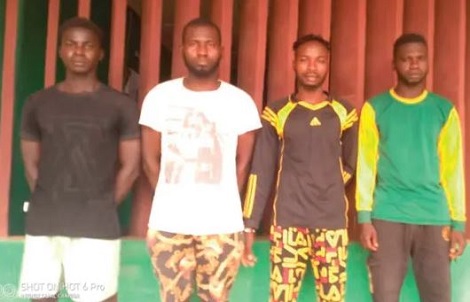 Nine suspected cultists have been arrested by men of the Lagos State Police Command for allegedly terrorising residents of Imota, in the Ikorodu area of the state.

The suspects, including Emmanuel Chinonso and Thomas Israel, who had been on the wanted list of the police, were arrested by personnel of the Operation Crush unit of the command, around Igbalu community, Imota.

He stated that the suspects confessed to the crime, adding that they would be charged to court.

Elkana said, “On Friday, September 6, 2019, around 9am, the Imota Police Station received information from a reliable source that  some cultists on the police wanted list were sighted in Igbalu community.

“Operatives of Operation Crush attached to the division were promptly deployed in the area. Two suspects, Emmanuel Chinonso and Thomas Israel, were arrested. Items recovered from them included two battle axes, a knife and one beret, belonging to the Eiye Confraternity.

“The suspects confessed that they were key leaders of the Eiye Confraternity and that their gang was responsible for a series of attacks in Imota, Ikorodu. In a follow-up investigation, seven additional suspects were arrested between Friday, September 6, and Sunday, September 8, 2019.

“They are: Ariyo Omonuga,  Oyerinde Omoniyi, Adelaja Opeyemi,  Hassan Babatunde, Sodiq Babatunde, Sodiq Oladire and Shakiru Liasu. Investigation is ongoing and the suspects will be charged to court.”
Top Stories