The event was held in the presence of other students during the final match of the Fresher’s Cup at the Sports Complex of the institution. 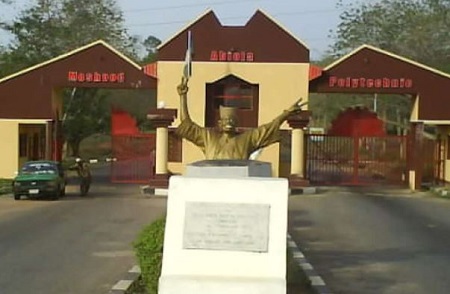 MAPOLY Rector, Dr. Samson Odedina, disclosed this in a statement issued by the Public Relations Officer of the institution, Yemi Ajibola on Thursday.

Ajibola said the management would pay Olaleye’s tuition for one academic session as a mark of honour for her integrity.

He explained that Olaleye, a Higher National Diploma, accounting student, found cash of twenty thousand naira within the school premises and returned it.

According to Ajibola, Olaleye said she found a wallet contained the sum without any means of identification to trace the owner and returned the money to the leadership of Students Union of the Institution.

The statement read “upon the development, the executive of the Students’ Union, after painstaking efforts located the owner of the money, who claimed it was meant for his tuition and informed the Rector of the development.

The statement further read “Aminat said, I found the sum of N20,000  at MAPOLY Center for Entrepreneurship Development in August, without any means of identification.

“I know the money  is  meant for someone’s school fees. Immediately, what struck my heart was that, what situation would the owner of the money be and what if I was in that position. How would I feel losing my school fees?”

The Students’ Union leadership reportedly appreciated the student and conferred on her an Award of Integrity.

The event, according to the statement, was held in the presence of other students during the final match of the Fresher’s Cup at the Sports Complex of the institution.

Ajibola further explained that the management took the decision to pay her tuition for one academic session as part of the efforts to encourage dignity and integrity among staff and students of the institution.

The PRO said the rector while announcing the decision, charged the students populace to emulate the feat displayed by Olaleye as good ambassadors of the institution.
Top Stories