It has been revealed that over N150 million, including exotic cars have been recovered from internet fraudsters. 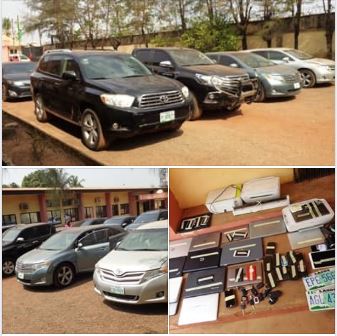 Cars recovered from yahoo boys (File photo)
The Economic and Financial Crimes Commission (EFCC) has recovered $169,850, N92 million and four exotic cars from 167 Yahoo Boys in 38 days in a joint operation with the United States’Federal Bureau of Investigation (FBI).
The operation, tagged ‘Operation Re-wired & Cybercrime-related Fraud’, was initiated following the indictment of 77 Nigerians for alleged cybercrime in the US.
Details shortly…
Top Stories