A Peoples Democratic Party senator has been declared winner of the Ekiti South Senatorial District poll. 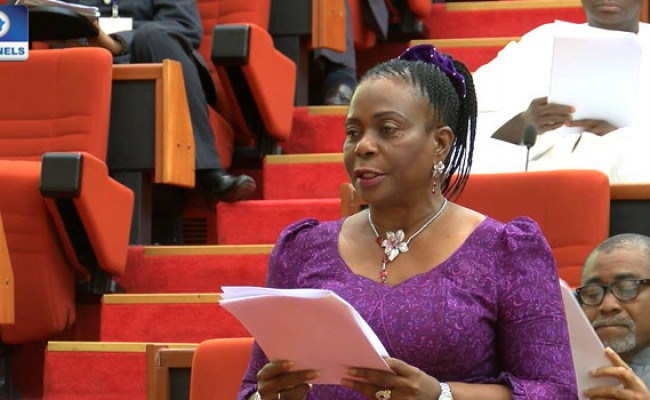 Senator Biodun Olujimi
The National Assembly Election Petition Tribunal sitting in Ado Ekiti, state capital, has nullified the election that produced Chairman Senate Committee on Media and Public Affairs, Senator Dayo Adeyeye, according to a report by TheNation.
Adeyeye was declared the winner of the Ekiti South Senatorial District poll.
Hon. Danladi Adeck, a member of the three-man panel of the tribunal, who read the unanimous judgement on Tuesday declared former Minority leader and the candidate of the People’s Democratic Party, Senator Biodun Olujimi winner of the election.
Following the declaration of Adeyeye, the candidate of the All Progressives Congress( APC) winner by the Independent National Electoral Commission (INEC) in the February 23, 2019 Ekiti South Senatorial election, Olujimi, had approached the tribunal to praying that she should be declared the actual winner of the election.
She submitted that she scored the highest number of lawful votes cast during the election.
Olujimi prayed the tribunal to nullify Adeyeye’s victory and order supplementary election accordingly in the district.
In her written address, the petitioner claimed that the election was not conducted in substantial compliance with the provisions of the Electoral Acts, having been allegedly fraught with all manners of irregularities.
She prayed the Tribunal to annul votes in areas that were found to be incredibly marked with irregularities like over voting, multiple thump printing, ballot snatching, ballot stuffing and improper ballot counting should be canceled to know the actual winner of the poll.
The petitioner also accused the INEC of dereliction of duties, saying most of the documents used for the conduct of the election were not duly signed by agents.
But the respondents countered the submission, saying INEC did what was right and constitutional, by declaring the candidate of the APC the winner having found to have got the highest number of lawful votes.
Justice Adeck nullified the elections in some polling units to declare Olujimi the authentic winner of the polls.
Eventually, Olujimi polled a total of 54,894 to emerge victorious over the Adeyeye, who polled 52,243.
He added that apart from the nullification in some units, the outcome of the tribunal’s verdict was predicated on the recount of the ballots by the contending forces as granted by the court.
Justice Adeck, said for the petitioner to be so declared, she must prove those cases of criminal allegations of non-compliance with the provisions of the Electoral Acts and other corrupt practices raised in her petition beyond reasonable doubt, which he said she did.
The tribunal said in Ikere, Gbonyin and Emure local governments, the petitioner was able to prove cases of over voting and votes in those units were expunged from the ballots.
The Tribunal said: “It is not tenable to say that marked ballots were not properly deposited in the boxes because when this did not happen, then it will lead to over voting and will affect counting at every level of collation.
“To avoid this pitfall, those elections must be expunged in order not to vitiate the electoral process. Therefore, after those votes were deducted, PDP was left with 54, 894 while the respondent polled 52, 243.
“The petitioner having polled the highest number of lawful votes should be declared the winner of the election.
“We hereby declare the petitioner the winner and he is hereby returned elected.
“We hereby direct the INEC to withdraw the certificate of return from the respondent and issue same to the petitioner,” he said.
Top Stories