Did Gov. Fayemi's Wife Ask Police To Shoot At Protesting University Students? This Is What She Has To Say 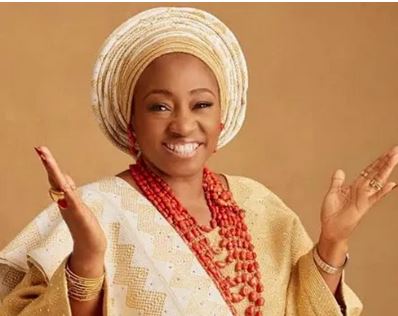 Mrs Bisi Fayemi
According to Vanguard, the wife of the Ekiti state governor, Mrs Bisi Fayemi has denied social media reports that she ordered security operatives in her convoy to shoot students of the Federal University Oye-Ekiti (FUOYE) Ekiti.
The students who were on Tuesday protesting in Oye-Ekiti over incessant power outage in the community attacked Mrs. Fayemi’s convoy where vehicles were damaged.

The fracas led to a clash between security operatives and the students where  Joseph Okonofua, a 300-level student of the institution was killed and several others injured.

The governor’s wife in a statement on Wednesday regretted the attack on her convoy by the students, revealed that the casualties did not occur when she was at the scene.

She refuted the insinuations that she failed to address the protesting students, saying, “this is totally false. I did not encounter any group of students when I got to Oye town.”

Mrs Fayemi while condoling with the family of the deceased students, wished a quick recovery to all those that sustained injuries in the fracas.

She said, ” Half-way through our event, there was a disturbance outside. The FUOYE students (and possibly infiltrated by local thugs) had re-grouped and were trying to get into the venue. The security officers prevented this from happening. We finished our program, and by the time we got outside, we found that vehicles from my convoy and those of my guests that were parked outside the venue had been vandalised. As we were driving out of Oye town, we encountered at least two road blocks that the students had mounted to prevent the movement of vehicles. I could see students/thugs throwing stones and large sticks at us as we drove by.

” However, the casualties that were recorded did not take place while I was there. There are eye-witnesses, photographs and video footage to confirm this.

” There are reports circulating that the crisis occurred because I refused to address the protesting students. This is totally false. I did not encounter any group of students when I got to Oye town. They had dispersed before my arrival, and when they regrouped I was inside the venue. It is possible, as I stated earlier, that the group that came to the venue trying to gain access with sticks and stones in hand might have included local hoodlums, but there was no way of telling the difference.

” I am scandalized and shocked beyond words to hear that I instructed security officers to shoot at students. If I had met a group of protesting students, as a social justice activist myself, I would have listened to their complaints and addressed them.  I firmly believe in citizens’ rights to protest on issues of concern.

” I am deeply saddened that at least one fatality has been recorded. As a mother, my heart bleeds. All these students are my children, and no mother prays to weep over their offspring. I extend my sincere condolences to the family concerned, and I wish those who are still receiving treatment a speedy recovery.”

In the statement, the governor’s wife announced the suspension of her tour of the local government areas which commenced on Monday pending the review of the incident.
Top Stories