A three-storey building and a prison wall have collapsed in Onitsha after a heavy downpour was recorded in the area. 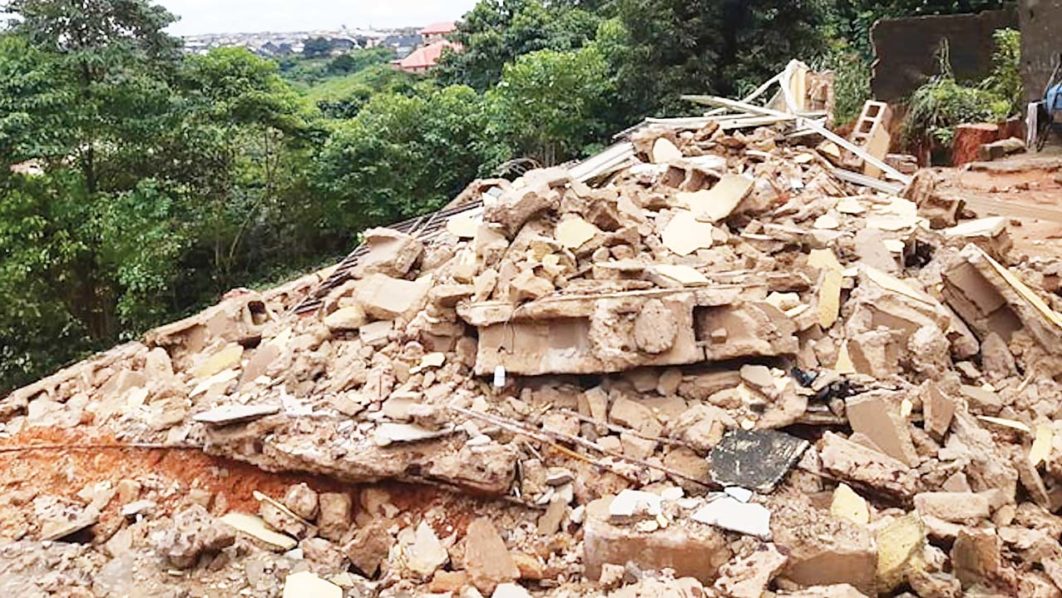 File photo
According to a report by TheGuardian, a three-storey building yesterday collapsed at No. 22, Nkisi Aroli Street, Onitsha, Anambra State. The building said to belong to one Chukwuma Njeka, collapsed following a downpour. Thankfully, no casualty was recorded.

The prison wall of the Onitsha custodial centre, (formerly known as Onitsha prisons) also suffered a similar fate as the rear fence of the prison collapsed at about 6:30a.m. during the downpour. Eyewitnesses said no casualty was recorded, neither did inmates escape from the facility due to the collapse.

The police spokesperson in the state, Haruna Mohammed, confirmed both incidents, saying the scene was cordoned off by the police to prevent looters from taking advantage of the incident, while the debris were also being cleared. He added that the Commissioner of Police, John Abang, had ordered for immediate deployment of police personnel to secure the area.

While corroborating eyewitnesses’ accounts that no life was lost in the disaster, Mohammed said the Commissioner of Police had visited the scene and reported no casualty. “The building collapsed today (Wednesday) due to downpour. No casualty recorded and value of property damaged is yet to be ascertained.”

The police spokesman added that the police boss equally visited the Onitsha custodial centre, where the rear fence of the prison also collapsed following a downpour. The CP ordered the immediate deployment of police personnel to secure the area.”

This is coming after a recent collapse of another three-storey building, which claimed five persons’ lives in Onitsha, the commercial city of the state. Shortly after the incident, the Anambra State government set up a probe panel to investigate the cause of the building collapse. This was announced by the Commissioner for Information and Public Enlightenment, Mr. C Don Adinuba, who noted that Governor Willie Obiano had taken the responsibility of offsetting the medical bills of the victims still in the hospital.

Meanwhile, the General Manager, Lagos State Building Control Agency (LASBCA), Mrs. Abiola Kosegbe, has declared a lot of buildings in the state were distressed. She spoke at a stakeholders’ meeting on collapsed building organised by the Lagos State Emergency Management Agency (LASEMA) in Alausa yesterday.

Kosegbe, who said the statistics were alarming, assured that the agency had taken inventory and was already working towards addressing them. She appealed to residents to subject their buildings to integrity test, noting that all hands must be on deck to prevent building collapse in the state.

“We intend to come out with a lot of things that will help in preventing building collapse. Usually, when distressed structures are identified, we mark them and the owners are expected to take them down or perform needed repairs. But now, the government is being proactive and we try most times take action before such buildings collapses.

“Currently, there are a lot of distress buildings in Lagos right now and we have taken inventory of them. Hopefully, in the next two to three months, we are going to try to address the situation one by one,” she said.

Director General of LASEMA, Dr. Femi Oke-Osayintolu, said the meeting was called following the need for holistic approach in preventing building collapse. He said there was need to understand the remote causes of building collapse in the state, adding that the administration of Gov. Babajide Sanwo-Olu has made safety of lives and properties a priority.
Top Stories