How I Narrowly Escaped Death - Fayemi's Wife Opens Up


Following her neardeath encounter, the wife of Ekiti State Governor, Erelu Bisi Fayemi has shared her own side of the story. 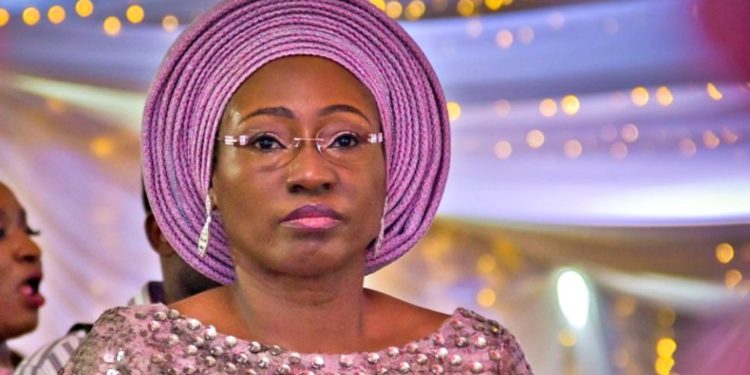 Ekiti State Governor's wife, Erelu Bisi Fayemi
Wife of Ekiti State Governor, Erelu Bisi Fayemi, has made startling revelation how she escaped death in Oye- Ekiti, the headquarters of Oye Local Government.
According to TheNation, the governor’s wife was attacked by protesting students of the Federal University Oye-Ekiti (FUOYE) while on an empowerment and advocacy tour to engage with women in the local government.
She was in the town in continuation of her tour across the state, which began from Moba Local Government and had visited Ilejemeje Local Government before arriving in Oye-Ekiti for the last leg of the tour.
While narrating her ordeal, Mrs. Fayemi in a statement titled: ‘The September 10th Oye-Ekiti Incident: Setting the Record Straight” disclosed that FUOYE students and possibly infiltrated by local thugs barricaded Oye-Ikole-Omuo highway to prevent the convoy of the wife of the governor from passing with a view to expressing their displeasure about poor power supply in the town.
She said her convoy was severely attacked by the protesting students with stones and cudgel until they escaped.
Explaining how the incident happened, she said: “While we were at Ilejemeje, we received a call from our advance security team that FUOYE students were protesting lack of electricity in Oye town.
“We were told that more information would be provided on the situation. Shortly after we received word that the students had dispersed and the coast was clear for my visit.
“When my convoy got to the Oye-Isan junction, we were met by a convoy of excited Okada riders who led us into Oye town. We made a stop at the primary health care centre along the road for me to present delivery kits to expectant mothers.
“There was no sign of any trouble. We proceeded to the venue of my town hall meeting at the civic centre with women in Oye Local Government. The atmosphere was very peaceful, the women were singing and dancing and there was nothing to indicate that anything was amiss.
“I stopped at the tent erected for the mobile health clinic in front of the civic centre to greet the elderly patients who were being attended to, and I also went to greet the beneficiaries of the Food Bank for the elderly project (Ounje Arugbo), who were assembled under another tent. I then proceeded to the hall for the programme.”
Erelu Fayemi added: “Half-way through our event, there was a disturbance outside. The FUOYE students (and possibly infiltrated by local thugs) had re-grouped and were trying to get into the venue. The security officers prevented this from happening.
“We finished our programme, and by the time we got outside, we found that vehicles from my convoy and those of my guests that were parked outside the venue had been vandalised.
“As we were driving out of Oye town, we encountered at least two roadblocks that the students had mounted to prevent the movement of vehicles. I could see students/thugs throwing stones and large sticks at us as we drove by.
“However, the casualties that were recorded did not take place while I was there. There are eyewitnesses, photographs and video footage to confirm this.”
Mrs. Fayemi, who expressed dismay over reports that the crisis occurred because she refused to address the protesting students, described the accusation as a monumental falsehood.
She denied that she instructed security details attached to her to shoot protesting students, stressing that she didn’t come across protesting students while she was in Oye-Ekiti for an empowerment programme.
Erelu Fayemi said she couldn’t have objected to civil protest being a human rights crusader and mother.
She said: “I did not encounter any group of students when I got to Oye town. They had dispersed before my arrival, and when they regrouped I was at the venue.
“It is possible, as I stated earlier, that the group that came to the venue trying to gain access with sticks and stones in hand might have included local hoodlums, but there was no way of telling the difference.
“I am scandalised and shocked beyond words to hear that I instructed security officers to shoot at students.
“If I had met a group of protesting students, as a social justice activist myself, I would have listened to their complaints and addressed them.  I firmly believe in citizens’ rights to protest on issues of concern.
“I am deeply saddened that at least one fatality has been recorded. As a mother my heart bleeds. All these students are my children, and no mother prays to weep over her offspring.”
Fayemi’s wife, however, commiserated with the family concerned, wishing those who are still receiving treatment a speedy recovery.
Top Stories