The sad story has been told of a Nigerian soldier who was wounded by Boko Haram and then abandoned by the army. 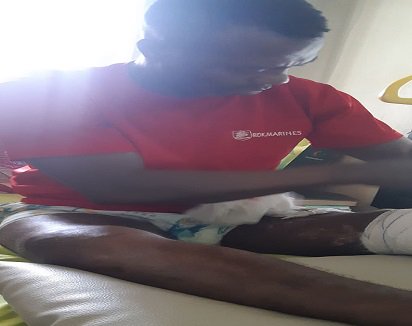 Sergeant Kenneth Dibie
With a hand on his head and the other resting on his amputated left leg, Sergeant Kenneth Dibie shook his head as he lamented the fate that has befallen him. He sobbed as he explained the hopelessness he has felt since his leg was cut off on Tuesday with warnings from doctors that he must deposit N800,000 for treatments within a week or risk losing his second leg to an infection that had feasted on his system after sustaining spinal cord and mine injuries in battle against Boko Haram terrorists in Borno State on July 12, 2017.

At the orthopaedic ward of 68 Nigerian Army Reference Hospital in Yaba, Mainland Lagos which has been his abode for over a year, Dibie, a native of Edo State could be heard saying: “I fought Boko Haram. I fought with all my strength, with loyalty and with patriotism. I fought those terrorists as if I was fighting to protect my immediate family. But see where I am, abandoned to my fate in the hospital. I am in pain, I feel defeated and hopeless. I have spent all my savings to treat myself and yet, there is no hope.

“Where do I get N800,000 to deposit so that I can be treated and my remaining leg saved? I am sad, I am in pain. I have lost appetite and it seems the army does not know I exist or the authorities just don’t care what happens to me.”

Dibie (94NA/38/1895) said their patrol vehicle ran into a Boko Haram land mine at Burugaga in Borno State on July 12, 2017, which killed all occupants save him.

“I was deployed to Northeast in 2015 and was there fighting terrorists until this incident happened to me. It was on July 12, 2017 while we were on patrol and preparing for an attack at Burugaga. We walked into ambush. We did not know that the terrorists have laid mines everywhere.

“The place is a desert and there is no one distinct road. Our vehicle was first and we were nine inside. The vehicle upturned and shattered together with the other soldiers. The debris of the scattered vehicle fell on me and pressed me to the ground.

“I was under the debris for about five minutes screaming for help. At first, the other patrol vehicles behind did not know someone was underneath until they heard me screaming for help and they lifted the debris. The vehicle was not Mine Resistant. It was a soft skin vehicle,” he said.

He was rushed to hospital.

“I was diagnosed of complete traumatic T12 paraplegia, posterior decompression of the thoraco-lumbar Segment T11, T12 and L1 of the spine as well as stabilisation with pedicle screw and rod. I was later referred to National Orthopaedic Hospital Igbobi, Lagos on account of proximity to home. But due to financial constraints, I was moved to the 68NARH Yaba where I continued physiotherapy until the session was suspended as a result of bed sores.

“I have been in this hospital for over a year. My health has degenerated. The doctor said the issue might have affected my kidney. I have spent over N5million since this accident. I have been paying my medical bills myself.

“I paid about N500,000 for the surgery on Tuesday. It was on Tuesday they cut off this leg and now I have been told to deposit N800,000 for treatment so that the other leg can be saved but I do not have the money.

“I am desperate. I do not want my  other leg to be cut off. I am appealing to the Chief of the Army Staff (COAS), my state Governor Godwin Obaseki and all Nigerians in general to come to my rescue.

“I sent a letter in November 2018 to the Chief of Administration and the COAS through the Commanding Officer 353 Artillery Regiment,  Commander 35 Artillery Brigade and Commander Corps of Artillery but I have not gotten any response.”

“I am making a passionate appeal to Nigerians to save me from this situation. I do not have any other hope.”

Spokesman for the army Sagir Musa, a colonel, denied wounded soldiers were abandoned to their fate by the army, asking our reporter to bring copies of the receipt to his office in Abuja for investigation.

He said: “Do you believe a soldier in military hospital will pay his medical bills? If you want to do complete investigation, I will urge you to come to my office with the receipts so I will take you to the appropriate office for findings.”
***
Source: The Nation
Top Stories