Four fraudsters claiming to be fortune tellers have landed in hot soup after defrauding a woman of N11 million in Abuja. 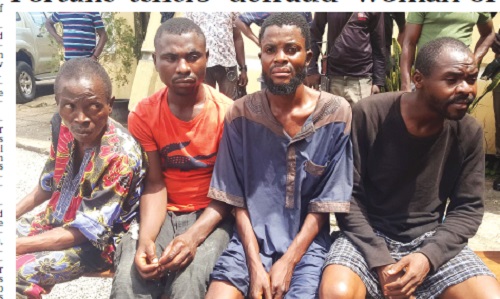 The suspects
The FCT Police Command on Thursday paraded four suspected fortune-tellers for allegedly defrauding a woman of N11million, a report by TheNation has revealed.
Kehinde Ayoola 37, Sesan Fatoye, 30, Shola Samuko, 50, and Seyi Fagbemi, 32, said they successfully defrauded their victim after convincing her that they saw a vision of a bright future for her.
The victim was said to have followed the ‘conmen’ to their shrine in the hopes that a dazzling future beckoned.
Speaking on how they were arrested, the Deputy Commissioner of Police in charge of Operations in the FCT, DCP Sunday Babaji said: “Police operatives acting on a complaint, smashed a notorious criminal gang that pose as soothsayers to defraud their unsuspecting victims.
“In her complaint, the victim noted that the gang had defrauded her of close to N11million before she alerted the police. The syndicates’ shrines are located at Waru, Pyakassa and Galadimawa village. While the command is working assiduously to arrest other members of the gang, the public is advised to be wary of persons who approach them on the streets as fortune-tellers.”
Items recovered from them include; charms, herbs, calabash, pipe, white and red pieces of clothes, and several green bottles with different contents.
Speaking on how their victim was defrauded, Kehinde Ayoola, a 37-year-old from Ekiti said: “I came to Abuja early last year to sell herbs but I found myself in police net after I saw vision for a woman I met.
“I told her she had bright future and that I would like to help her achieve her future goals. She was convinced by what I told her. When I got home, I gave the phone to my boss to convince her further and he told her to buy bible and other things.
“When she came to our shrine, we told her to write three things she desired most in life and what she would like to be. She said she wanted to be very rich, to be great and also be famous. She also complained that she and her husband were cats and rats and she desired to be richer than her husband.
“With what she mentioned, we started our work. We prayed for her and asked her to buy goat. We told her the goat would be used as sacrifice and after the sacrifice, we asked her if she was ready for her blessing. She said she was ready for her blessing but we told her that before she gets the blessing, we will need to buy four elephants.
He continued: “When we told her that, she brought about N1.6million for us to buy the elephants which we told her were sold at the rate of N450,000. We did not buy anything but we deceived her and told her that we have bought them and done the sacrifice for her.
“After that, we told her to go and get N9million again. Last week Wednesday, she asked me to come pick the money but when I got there, I was arrested.”
On how much they made from their victim, Ayoola said: “I have not made much from this business. The woman we defrauded was our major breakthrough. We only made small money from previous ones. We made about N11million from her but I only got N2.1million as my share.  From the money I made, I bought two plots of land in my village, I gave my mother who is hospitalized about N260,000, and I gave my younger ones who are in school too.”
Top Stories