Bode George urged Tinubu to collect a Bible from his wife, Senator Oluremi Tinubu, and read a part of it. 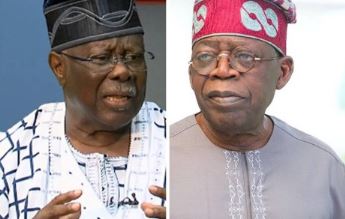 Bode George and Bola Ahmed
Chief Olabode George, a former Deputy National Chairman of the Peoples Democratic Party (PDP) has said Asiwaju Bola Tinubu, former Lagos State governor and National Leader of the ruling All Progressives Congress (APC) would be punished for moving against Yoruba leaders in Afenifere who assisted him politically to where he is today.
Speaking in an interview with Daily Independent, George, the Atona Oodua of Yorubaland urged Tinubu to collect a Bible from his wife, Senator Oluremi Tinubu, who is an Assistant Pastor of the Redeemed Christian Church of God, RCCG and read Psalm 73 to get a proper perspective of life.
“If he (Tinubu) thinks he has money, he is mistaken because money is not everything. Nobody has ever died with all his assets buried with him. He should go and read the Holy Book Psalm 73.
“He can borrow the Bible from his wife because she is a Deacon and see what the Almighty God can do which he did before during the time of David.
“Why is he claiming to be all-in-all? Can he be perpetual? So, sponsoring people and undermining the people who actually brought him to limelight is unfair. There is retributive justice. He will pay for it,” he said.
Top Stories