A notorious killer who has been on the run for some time now has been apprehended by security operatives. 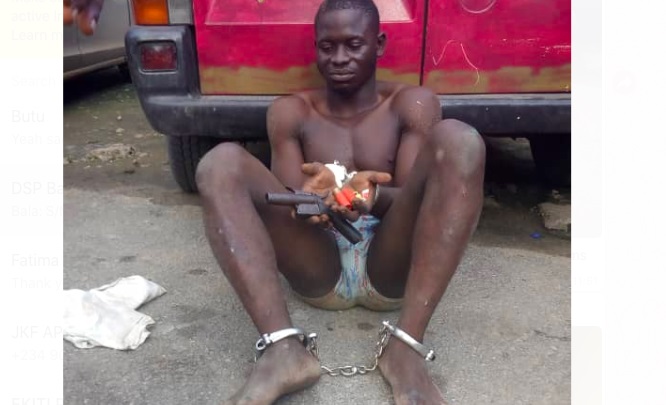 The suspect
Men of the Nigerian police in Lagos have apprehended a wanted killer, Kehinde Bakare  who has been on the run for sometime now.
A report of his arrest by the police reads:
On 12/09/2019 at about 1615hrs, following sustained monitoring, one Kehinde Bakare ‘m’ aged 23yrs old, a prime suspect in connection with the murder of one Samuel Ladejo ‘m’ was arrested at Obalende and one locally made pistol with two live cartridges was recovered from him.
It could be recalled that on 01/10/2018 at about 0600hrs, One Bisi Komolafe ‘f’ assistant manager of famous hotel situated at No 36 Obalende Road Ikoyi Lagos reported at the station that one of their staff by name Samuel Ladejo ‘M’ left the hotel to attend party along Obalende Road Ikoyi where he was stabbed in the chest by some boys who are now at large while he was rush down to general hospital for treatment victim later gave up the ghost in the hospital.
One Umukoro Otega ‘m’ was earlier arrested in connection with the crime and charged to Court. The suspect will be charged to Court.
Top Stories