Nigeria's President Muhammadu Buhari has appointed a former governor of the Central Bank of Nigeria, Chukwuma Soludo as member of the Economic Advisory Council. 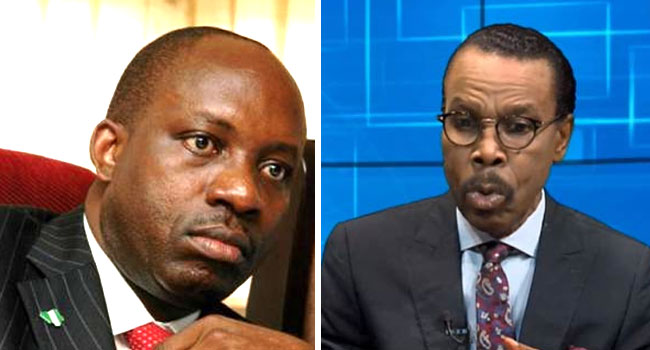 Chukwuma Soludo and Bismark Rewane
President Muhammadu Buhari has constituted an Economic Advisory Council (EAC), according to Channels Television.
The Special Adviser to the President on Media and Publicity, Mr Femi Adesina, announced this in a statement on Monday.
According to Adesina, the eight-man council is headed by Professor Doyin Salami with Dr Mohammed Sagagi as vice chairman while the Senior Special Assistant to the President on Development Policy, Dr Mohammed Salisu, is the secretary.
The President appointed as members, a former governor of the Central Bank of Nigeria (CBN), Professor Chukwuma Soludo, and the Managing Director/Chief Executive Officer of Financial Derivatives Company Limited, Mr Bismark Rewane.
Other members of the committee are Professor Ode Ojowu, Dr Shehu Yahaya, and Dr Iyabo Masha.
Adesina explained that the advisory council would replace the current Economic Management Team (EMT) and report directly to the President.
The Council, according to him, will advise the President on economic policy matters, including fiscal analysis, economic growth and a range of internal and global economic issues working with the relevant cabinet members and heads of monetary and fiscal agencies.
“The EAC will have monthly technical sessions as well as scheduled quarterly meetings with the President.
“The Chairman may, however, request for unscheduled meetings if the need arises,” the statement said.
Top Stories