Barcelona Legend, Samuel Eto'o Should Have Won A Ballon d'Or


The Portuguese tactician feels the Cameroon legend merited being named the world's best player during his active years. 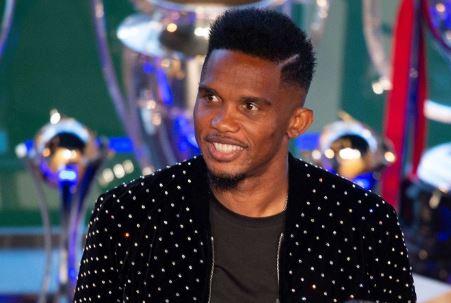 Samuel Eto’o
Former Chelsea and Manchester United manager Jose Mourinho believes Samuel Eto’o should have won the Ballon d'Or during his active career.
The 38-year-old retired from professional football after a 22-year trophy-laden career, winning two Africa Cup of Nations, and three Champions League trophies among other diadems.
Eto’o was named Africa's best player four times and finished third in the Fifa World Player of the Year award in 2005.
The Portuguese tactician first worked with the former Cameroon international at Inter Milan, where they both secured a treble in the 2009-2010 season before they reunited at Chelsea.
"It's difficult to understand how Samuel Eto'o never won the Ballon d'Or with the impressive career he had," Mourinho told Cameroon Radio, as reported by BBC Sports.
"Samuel played for the best teams in the best leagues in the world. He scored an incredible amount of goals and was successful in different leagues.
"He played three champions league finals, winning two with Barcelona and scoring in both finals. He also won one champions league at Inter and won many league titles.
"He was the best striker in the world for several years and I think he deserved a Ballon d'Or but these are things out of our control."
Mourinho, who praised the discipline and the impressive career of the former Barcelona and Mallorca striker, believes he will be a great success after retirement.
"Samuel's career was very impressive and he was one of the best strikers in the world for many years," he continued.
"He's an absolutely fantastic player and the most important thing for a footballer is his contribution to his team for victories.
"Samuel was a great individual player but was always a team player. He was always giving everything he could for his team to be successful. He is a trophy winner.
He won all the important competitions and he had a very phenomenal career.
"He was almost an unstoppable player but his qualities as a man at some point became more important. He was a good colleague and he could do all for his team to win games.
"While at Inter we played Barcelona in the champions league semi-finals, we were with 10 men and Eto'o played the entire game almost at right back. He sacrificed himself for the team and played at the position to ensure we win.
"That's what the team needed at that moment. In Milan we had won 3-1, going to Camp Nou, we didn't need to score, we just needed to get to the final and he understood this. He did what was necessary for the team to go through to the final.
"These are great human qualities and I have no doubts Eto'o will be successful after retirement."
Eto’o featured for 13 clubs before calling time on his illustrious career, which took him to Spain, Italy, England, Turkey, Russia and Qatar.
Top Stories