The Ondo state community where lighting struck as many as 36 cows dead is reportedly preparing to perform rites on the cows. 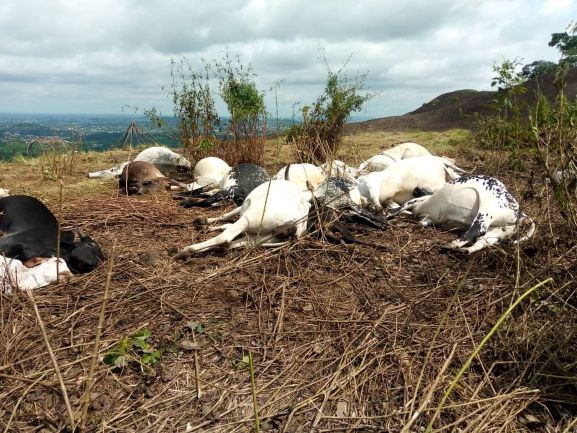 According to Punch Metro, following the mysterious death of cows at a ‘sacred land’ called Oke Owa in Ijare,  Ifedore Local Government Area of Ondo State, the community was preparing to perform some traditional rites on the land and the dead cows.

No fewer than 36 cows, belonging to some Fulani herdsmen, were struck dead by thunder on Saturday on a land considered to be ‘sacred’ for anyone to enter or farm in the community.

It was gathered that the Fulani herdsmen had earlier been warned not to graze their cattle on the ‘sacred land’ because the land was meant for past and present kings in the community but the herdsmen allegedly ignored the warning.

Speaking with our correspondent on the development, in a telephone interview chat on Monday, the second in command to the Ijare monarch, High Chief Wemimo Olaniran, said the community was preparing to perform some rituals on the land, following the development.

According to him, the incident of thunder striking to kill was spiritual and it had to be addressed spiritually by the community.

He said, “The community will do the traditional ritual on the matter after which we have the arrangement to bury the dead cows . May be the government would do something about the cows later.

“This is necessary because anything killed by the thunder, you can not do anything about it until certain traditional rituals are performed. So that is what the community is trying to do now.”

The traditional chief and legal practitioner also allayed the fears that the Fulani herdsmen would cause crisis as a result of the incident, saying the lightening was not caused by anybody but those who entered into the ‘sacred land’.

“The problem was not caused by anybody. When their leaders (Miyatti Allah) came here they too admitted that it was an act of God, so nobody should be blamed for it,” Olaniran posited.
Top Stories