Shocking! Many Escape Death As Suspected Kidnappers Open Fire On Passengers In Kogi


Some suspected kidnappers have opened fire on passengers in Kogi as they were traveling to Abuja. 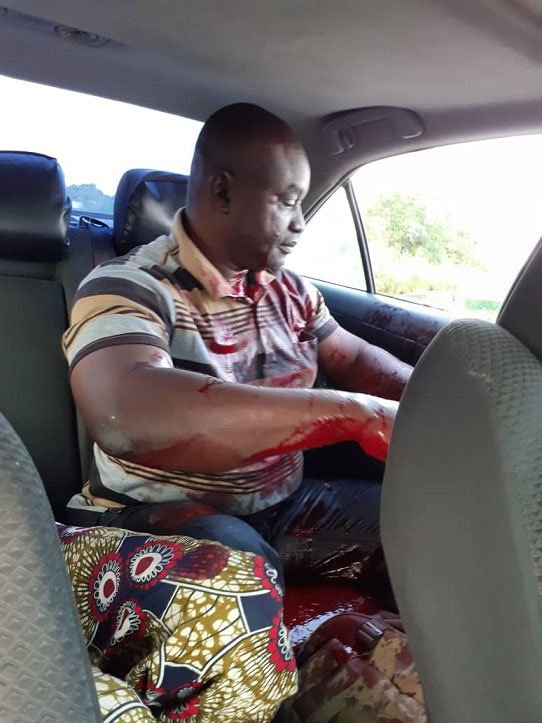 One of the victims
According to a report by The Nation, suspected kidnappers on Tuesday opened fire on an Abuja-bound passenger bus around Koton-Karfe, Kogi State, killing several of the occupants. Some survivors escaped with bullet wounds.

The assailants also shot and killed passengers of another bus, said to be coming from Port-Harcourt.

Also, passengers travelling in a Toyota Camry from Ibadan enroute Abuja, who  made to escape after running into the scene, sustained various degrees of injuries.

A survivor who narrated his ordeal told The Nation that the incident occurred at about 5.58 pm.

Speaking on the condition of anonymity, he said he along with four others in the Toyota Camry were headed to Abuja from Ibadan when suddenly they sighted some masked men in military gear, about two kilometers ahead.

He said the attackers wore military camouflage, with black masks, and were stopping vehicles.

According to him, some of the occupants of the vehicles that they stopped were being marched into the bush.

The driver of a bus coming from Port-Harcourt, on sighting them, tried to escape, but the bus was shot at, deflating its tires. The vehicle summersaulted, killing all the occupants.

He said, “It was at this point we noticed that they may be kidnappers. Our driver then engaged reverse gear and they started firing at our car.

“The driver was hit on the shoulder with the bullet coming out at the other side, and it hit the man in the back seat on the head.”

He said they drove to the Gegu police station, from where arrangement was made for their evacuation to the Koton-Karfe General Hospital, from where they were taken to the Federal Medical Centre Lokoja.

According to the police extract diary obtained by our correspondent, the incident was reported on Wednesday by one of the victims.

The Kogi State Commissioner of Police (CP), Mr. Hakeem Busari while confirming the incident, said that he got a report that a car stopped by kidnappers dressed in camouflage was shot at, which made it to summersault, killing all the occupants, including an Assistant Superintendent of Police (ASP), from Edo State.

He said police had started investigating the incident.
Top Stories