Ganduje In Alleged Plot To Move Emir Sanusi From Kano


The last is yet to be heard of the feud between Governor Umar Ganduje and Emir Sanusi with the fresh alarm raised. 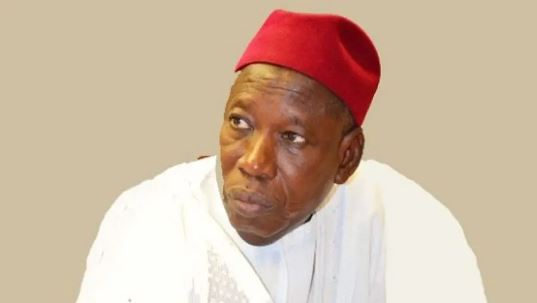 Governor Umar Ganduje
A Renaissance Coalition of Civil Society Group in Kano State, has allegedly uncovered moves by the Governor Ganduje-led administration to swap Emir Sanusi from Kano to Bichi Local Government.
The group’s spokesperson, Ibrahim Wayya, said in a statement he signed that, “It has come to the notice of the Renaissance Coalition that, Kano State Government has gotten a wind of a vile plan to swap the Emir of Kano Mallam Muhammadu Sanusi II, CON to Bichi, and in the event he resists, he shall be deposed.
“This is quite unfortunate that, despite a subsisting court ruling which has ordered the maintenance of status quo pending conclusion of the matter before it, and even the contentious law which was maliciously and hurriedly made, and is being challenged before the court, has not explicitly provided for such swap,” he added.
He said, “This is indeed a very dangerous move that is likely to cause violent unrest in the polity, and the alleged plot also shows extreme desperation on the part of the governor to advance a personal vendetta at the expense of the peace and wellbeing of the citizens he swore to protect.”
“We deem it our responsibility to do everything possible within our power to advocate for the peace and wellbeing of the citizens, by calling on all well meaning individuals and the Federal Government, to call the governor to order, to seize and desist from any further hostile action against the Kano emirate and the person of the Emir of Kano Mallam Muhammadu Sanusi ll.
“We believe in the adage better safe than sorry, we always want to be on the right path and the right side of history, expressing our objective opinions and engage relevant authorities for appropriate and timely action to prevent societal disasters,” he warned.
Ibrahim further noted that ” We decided not to wait and be reactive but to be proactive because of the perceived heavy toll the repercussions of the alleged action of the Governor Abdullahi Umar Ganduje, awaits the people of Kano, if the alleged plot is materialized and remains unchecked.”
“Therefore, as responsible and concerned citizens, we strongly call on the governor to desist from going on with this alleged plot and such similar action, which is capable of jeopardizing the relative peace we enjoy in the State. We also particularly call on the security agencies, political leaders, the respected elders, venerated Ulamas, intellectuals, opinion leaders and any person or people with the means to reach out to advise the Governor to desist from such act.”
“However, in the event that the Governor refuses to heed the good counsel and goes ahead to actualize the evilly hatched dastardly agenda, we would be left with no any other option but to call on the federal Government to declare a state of emergency in Kano state as soon as the Governor makes the pronouncement of the alleged plot, in order to save Kano State from the consequences of the Governor’s action.
” We wish to use this medium to remind the people and Kano State Government on the consequences that occurred when similar action was attempted against the then Emir of Kano, Alhaji Ado Bayero in 1981. We are of the strong belief that, today if such action is attempted may likely be the worst because of increased social and economic stress which are already keeping people on edge, ready to erupt as well as a much higher restless youth population in the State.”
“It is our prayer that, the Federal Government, must to do everything possible to prevail on the Governor to forestall the alleged plot of Swapping the Emir of Kano Mallam Muhammad Sanusi, to ensure that our dear State remains peaceful.”
All efforts to get government response on the matter were not successful.
Top Stories