A woman has ended up giving her husband concussion while she was trying to give a shot at 'Dirty Dancing'. 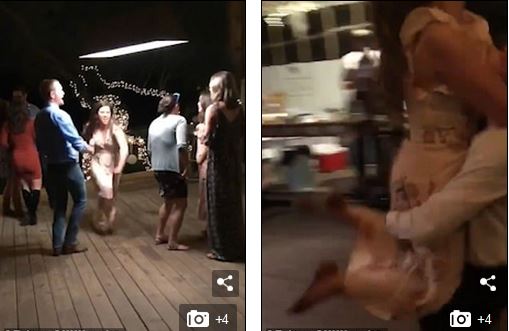 Morgan Murray can be seen making her run up along a wood-decked outside area towards her husband in the hope of recreating the scene from Dirty Dancing
This is the hilarious moment a couple suffered wedding dance floor humiliation by attempting the famous Dirty Dancing lift - only to come crashing down.

Morgan Murray and her husband were having the time of their life at his brother's wedding when they decided to show off their moves.

But where most couples might chicken out of the acrobatic lift, these two, from Tennessee, gave it their best effort.
In the footage, shot on a outside wooden decking area, Morgan can be seen making a long run-up towards the arms of her husband.

The idea appeared to be to replicate the 1987 film, where Patrick Swayze's Jonny lifts Baby, played by Jennifer Grey, up over his head by balancing her torso.

But Morgan instead slams head-on into her husband as she doesn't get enough lift.
He then topples backwards into a buffet table and smacks his head on the floor. 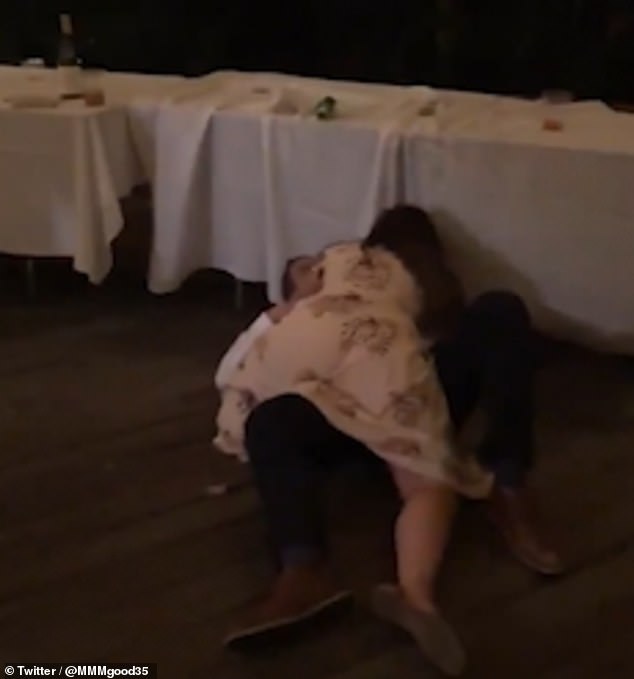 But failing to get enough lift, both Morgan and her husband crash down on a buffet table before he smacks his head on the floor
Morgan posted the video online in a reply to US talk show host Jimmy Fallon's request for wedding fail videos from his viewers.

'My husband and I tried to do the Dirty Dancing move at his brother's wedding,' wrote Morgan.

'Turns out we should have left it to Patrick Swayze... I ended up bursting my mouth open and he had a concussion.'
But even stranger is the fact that, 'Time Of My Life', the hit the dance is set to, isn't even the song playing in the background.

The couple had instead made the catastrophic spur-of-the-moment move to Selena's Gomez's 'Come & Get It'.

One user commented: 'Your look of confidence right before the jump kills me. You really thought you were going to nail it.'