The duo of Mercy and Tacha might risk disqualification following their physical confrontation this morning. 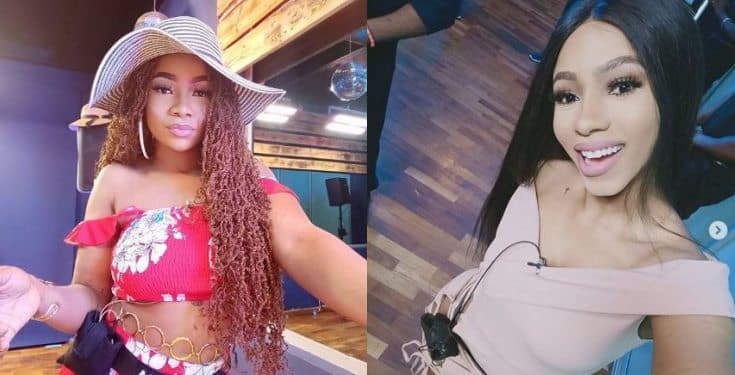 Tacha and Mercy
Mercy and Tacha could face elimination after they got physical during this morning's fight at the BBNaija house.
Recall that the incident started after the early morning work out.
Seyi had called the housemates to gather for him to read Biggie's scroll only for Mercy to come late and being tackled by Tacha.
That didn't go down well with Mercy who fought back.
Before you know it, things escalated into a fight. Omashola, Seyi and Cindy came in between the duo to stop the fight as Tacha started pulling Mercy’s wig.
It has been revealed that Tacha might be disqualified after she was caught on tape dragging Mercy's hair and pushing her during the fight.
This fight comes a few days after she fought Diane over 'Red box' and Omashola over robes.
Tacha and Mercy are the biggest rivals in this year’s edition of Big Brother Naija. Somehow they have been on each other’s neck and today they took their subtle dislike for each other to the next level.
Watch videos below:

Big brother be slacking FRFR this is enough for disqualificationðŸ¤¦ðŸ�½‍â™‚ï¸�#BBNajia pic.twitter.com/9fctkOBUVG