Dagwa said that the Corps would continue to monitor road users to guard against overloading and dangerous driving. 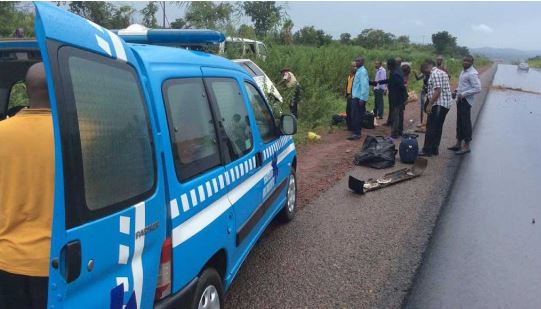 File Photo
The Federal Road Safety Corps (FRSC) in Niger State has said that 10 persons were killed in an accident on Sept. 25 in Skafa village, Mokwa Local Government Area of the state.
FRSC Sector Commander, Mr Joel Dagwa, told News Agency of Nigeria (NAN) on Friday in Minna that the accident involved an articulated vehicle and a commercial bus.
He added that the accident involved a trailer with registration number KTU 282 XM and commercial bus GGE 879 XV along Mokwa-Jebba road.
“The accident left 11 injured and they were taken to general hospital, Mokwa for medical attention while the corpses were deposited at the mortuary,’’ he said.
The sector commander attributed the cause of the accident to speeding and dangerous overtaking.
He said that the Corps would continue to monitor road users to guard against overloading and dangerous driving.
“We have already embarked on a 24-hour patrol on all the federal highways to ensure safety of road users by enforcing traffic rules and regulations,” Dogwa said.
He appealed to road users to obey traffic rules and regulations to avoid crashes.
Top Stories