The story has been told of a woman who ended up falling in love with the DJ who played at her wedding. 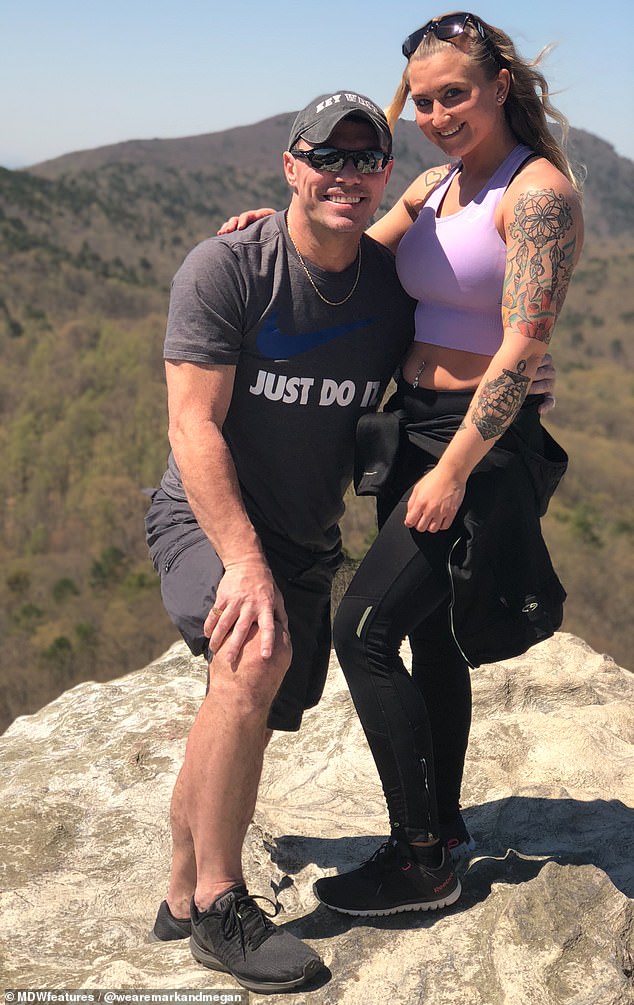 Megan Willis (right) 26, from Baltimore, Maryland, first met her current partner, business analyst and DJ, Mark Stone (left) 49, in November 2015 at a local restaurant
A woman has fallen in love with her wedding DJ, just two years after she got married - after her husband made her feel 'neglected'.

Megan Willis, 26, originally from Baltimore, Maryland, first met her current partner, business analyst and DJ, Mark Stone, 49, in November 2015 at a local restaurant he was working after being introduced by her sister, Kristen.

They shared a laugh and Megan's sister later booked Mark to DJ at Megan's wedding in July 2016. However, a year into her marriage, Megan was unhappy and felt neglected in her relationship and while she was at home bumped into Mark again - where she found herself opening up to him about her marriage.

They became close friends and started to chat every day and Mark confided that he he had from his wife, of 27-years.

When Megan filed for divorce, Mark supported her and by August last year, with both of their divorces finalized, they moved to North Carolina to be together - as they'd fallen in love with each other.
At first Megan had her doubts because of their 23-year age gap, but the more time the pair spent together, her doubts disappeared.

Both Mark's and Megan's families were accepting of their relationship and were pleased that they had found happiness together.
'Basically, our story starts with my sister and a restaurant called The Crazy Tuna Bar & Grill back home in Maryland. My sister went to this bar a lot and when I came home to visit from Saratoga Springs, New York, she took me there.

She introduced me to DJ Mark Stone and his brother who was part owner of the Crazy Tuna,' said Megan.
'Every time I came home to visit we would go to the Crazy Tuna and most of the time Mark was there. He was such a people person, so much fun and we loved to goof around with him. Little down the road I got married and my sister hired Mark to DJ my wedding.

'About a year later I was home visiting and we went to the Crazy Tuna, Mark was there and we spoke about my marriage and how I'm not happy in it.

'After that night the conversation continued because Mark was having some similar issues in his marriage of 27 years. So we started chatting daily.

'My marriage ended because I wasn't fully happy and wasn't getting what I needed out of it. My ex was addicted to a video game - that basically became his life and I was non-existent.

'He didn't want to spend time with me, didn't want to go out and explore. He counted hanging out as me watching TV and him playing his game with headphones on in the same room. I realized that I shouldn't have to feel non-existent or beg for someone's attention, so I filed for divorce.
'Talking with Mark really led me to the realization that I shouldn't have to beg my husband for attention. Mark was just a friend yet everyday he took time to check in on me. We both really enjoyed our chats no matter how silly or serious they were.

'When me and my ex would get into an argument Mark was there to calm me down and just remind me it all would be okay. His support through it all really meant a lot to me.

'Going through something like a divorce you really need to have someone there to support you and to vent to and that's exactly what Mark was for me and I'm forever thankful for that.

'I think I realized I'd fallen for him first. Though it was while Mark was still married but separated from his wife it wasn't something I felt I could act on. I kept it to myself. At this time he needed the support like he gave me and I made sure I was there for him in that way.

'At first I had the, "Oh god are you falling for him?" thought, and after that it was, "Can this even work?" and then, "Will people think I'm some gold digger?"

'Being together all negative thoughts went away. I'm an older soul and he's a young soul so it's almost like we meet in the middle and it's perfect.'
***
Source: Daily Mail UK
Top Stories