Security operatives have been spotted rough-handling publisher of SaharaReporters in court. 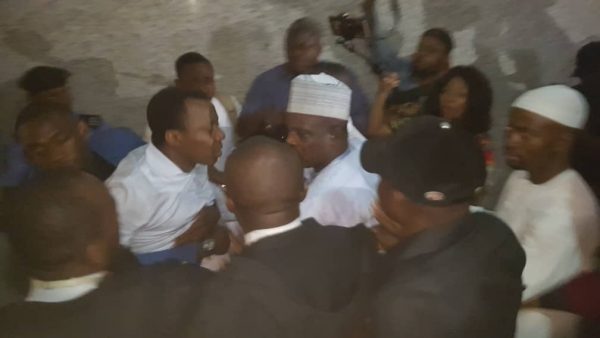 Sowore in court
Operatives of the Department of State Services (DSS) have been seen on tape rough handling Omoyele Sowore in court today as he made attempt to give a statement.
The publisher of Sahara Reporters appeared the Federal High Court sitting in Abuja on Monday, September 30 alongside his co-defendant, Olawale Bakare.
Justice Ijeoma Ojukwu in her ruling had said Sowore remain in DSS custody pending the hearing for bail application on Friday, October 4.
Shortly after the court appearance, Sowore attempted to speak to the press but was reportedly rough-handled by DSS operatives who dragged him away into their waiting vehicle in spite of the protest from his supporters.
Earlier today, the Federal High Court ordered that publisher of Sahara reporters be detained in custody pending hearing for bail application on Friday, October 4.
Watch video below:

UPDATED: DSS In Show Of Shame, Drags #Sowore Out Of Courtroom | Sahara Reporters
The rash and harsh action of the secret police was to prevent the rights activist from speaking with journalists present in the courtroom.
READ MORE: https://t.co/2spZXTzAsb pic.twitter.com/exgcDXOcAc