A pastor has been taught a bitter lesson after flaunting an order given by a chief priest. 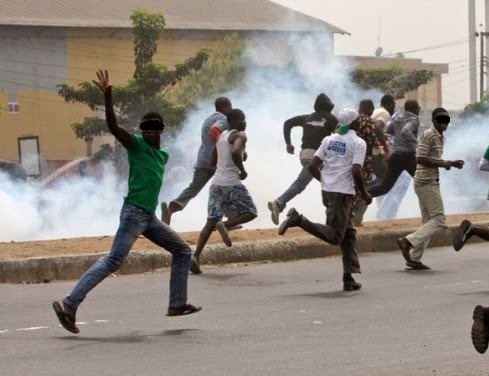 File photo
General Overseer of the City of God Rest Ministry, Pastor Destiny Eguavoen, was on Sunday beaten up by youths of Urora community in Edo state for flouting the community’s order to stop church service before 8am.
According to a report by TheNation, Chief Priest of the community, Chief Ugiagbe Aiwaguore, Ohen Ugbodeyaen of Urora, had ordered owners of shops in the community and residents to stay indoors for the celebration of the annual Ikpoleki festival.
All churches were asked to end their Sunday service before 8am.
Chairman of the Christian Association of Nigeria, Bishop Oyenude Kure, kicked against the order saying it violated the freedom of worship as enshrined in the Nigeria Constitution.
Bishop Kure asked churches in Urora to go about their normal church service on Sunday.
He said the restriction on movement was unacceptable to the church as the body of Christ.
It was gathered that youths of the community moved from street to street to ensure compliance as shops were closed and some churches hurriedly ended their service while other refused to open for business.
Many residents in the community were indoors.
At the City of God Rest Ministry, the youths were peeved that the Pastor was still preaching as at 9am and they disrupted the service.
Members of the church scampered for safety as the youths used chairs to beat anybody in sight.
Speaking to our reporter on phone, Pastor Eguavoen said he was badly injured during the attack.
Pastor Eguavoen who said he was at the police headquarters said the leadership of CAN has promised to take over the matter.
According to him, “We were in the church and I saw a man standing in the front pointing at me. It was few minutes past nine. I told my members to concentrate for me to round up service but the youths stormed in and started beating us.
“They said we did not comply with their directive. They told us to open church between 6am and 8am but we Pastors met and said Sunday’s is a day of our worship and there is no way they can stop us.”
Spokesman for the community, Sunday Osagiede, said they gave churches time within which to open service on the day of the Ikpoleki festival.
The Chief Priest said all the Pastors agreed to hold service between 8am and 9am.
Police spokesman, DSP Chidi Nwabuzor, said the matter was being investigated.
Top Stories