Arsenal and Manchester United slugged it out yesterday in a premierleague clash. 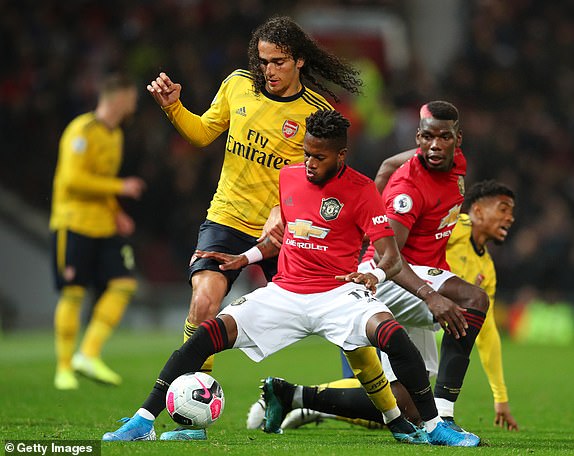 Manchester United Vs Arsenal Match
Manchester United were held to a 1-1 draw at home by Arsenal on Monday in a Premier League game which was a poor imitation of some of the past clashes between the clubs.
Pierre-Emerick Aubameyang’s 58th minute goal, given after VAR review, cancelled out Scott McTominay’s well-struck opener on the stroke of halftime, but it was a game which highlighted the weaknesses of the two teams.
The result leaves United in 10th place with just nine points, their worst start after seven games for 30 years and they have won just one of their last six league games.
Arsenal are in fourth spot on 12 points but their nine-point gap with leaders Liverpool illustrates just how far away they are from being real contenders.
This fixture is part of the folklore of the Premier League era, producing some epic battles between Alex Ferguson and Arsene Wenger’s title-winning sides.
And while there is certainly a retrospective feel to Old Trafford under the lights and in the rain, the only throwback on the field was some of the heavy and late challenges.
There are multiple weaknesses in both teams but what stood out when they faced each other was the utter lack of class and quality in midfield.
Arsenal look lightweight and lacking any real spine while United, despite having Paul Pogba back from injury, were short of attacking options and creativity.
United keeper David De Gea pulled off a fine double-save in the 44th minute, pushing out a low shot from Bukayo Saka and then doing well to keep out Matteo Guendouzi’s follow-up.
Moments later, United had the lead when Marcus Rashford found McTominay on the edge of the box and his slightly deflected shot towards the top corner beat the motionless Arsenal keeper Bernd Leno.
Arsenal got back on level terms in controversial circumstances in the 58th minute with a goal from Aubameyang.
United left-back Axel Tuanzebe gave the ball away to Saka who threaded through to Aubameyang but the linesman raised his flag well before the Gunners striker put the ball past De Gea.
VAR review correctly showed that Harry Maguire had played Aubameyang onside and the goal was then given.
However, United manager Ole Gunnar Solskjaer appeared furious that the linesman had flagged when recent practice has been for the flag not to be shown until the end of a move.
McTominay then missed a glorious chance to secure the three points and his growing reputation when, from an Ashley Young corner, he headed over the bar from close range.
Leno then made two good saves to keep Unai Emery’s side on level terms.
First he dived to deny Maguire’s effort from the edge of the box and then reacted well to keep out Rashford’s stoppage time free kick.
-Reuters/NAN
Watch video below:
Top Stories