A witness has appeared in court to talk about how JAMB officials tried to stop A JAMB auditor from carrying out a financial audit of the zonal office. 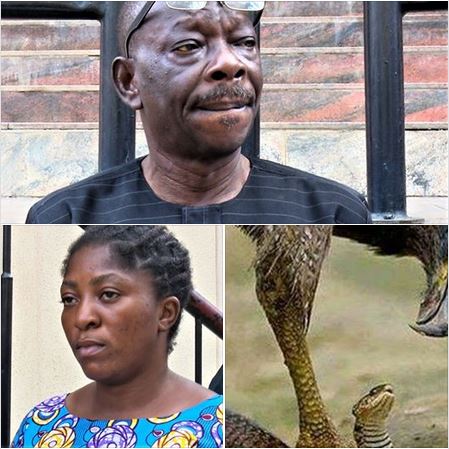 Samuel Saleh Umoru (top), Philomina Chieshe (left)
Fresh details have emerged as to how the duo of Samuel Saleh Umoru, chief accounting officer and state coordinator of the Makurdi Zonal Office of the Joint Admissions and Matriculation Board, JAMB and Mrs Philomina Chieshe, a clerical officer in the same office, conspired to stop the Board's auditor, Mallam Ibrahim Oba, from carrying out a financial audit of the zonal office with a bribe of N50,000.00 (Fifty Thousand Naira).

This was revealed by the first prosecution witness, Patrick Obilo who is also an auditor with the Board, as he appeared before Justice Peter Affen of the FCT High Court, Maitama, Abuja on Monday, September 30, 2019.

Umoru and Chieshe are first and second defendants respectively in a charge brought against them by the Economic and Financial Crimes Commission (EFCC), over the disappearance of JAMB's N35,000,000 (Thirty-five Million Naira) in its Makurdi Zonal Office, where both work.

During Obilo's examination-in-chief, led by prosecution counsel, Ekele Iheanacho, he disclosed that Oba was sent to the Makurdi Office of JAMB in 2016 for a routine examination of the account books and consignment notes, which show quantities of items supplied such as e-facility cards-used to check and print results, change of course card, scratch cards, question and answer cards, receipts or tellers.

He revealed that during this procedure Chieshe visited Oba's hotel room with an envelope containing a sum of N50,000 as "gift" from her boss, Umoru, and urged him to return to Abuja.

The auditor according to Obilo, sensed danger and returned to Abuja and reported the situation to the head of JAMB's Audit Unit, James Ochijele, who ordered that the N50,000 "gift" be paid into the Board's account.

Ochijele had to replace Oba with the witness (Obilo) for the same assignment in the Makurdi office. While examining the books of accounts in the Makurdi Office, Obilo said he discovered a shortfall in the proceeds from the sales of e-facility cards and change of course forms to the tune of N35,480,000, which were not remitted to the Board's account.

Asked for explanation, Chieshe began to cry as she gave all manners of justifications for the disappearance of the money, including a tale that a mystery snake had been swallowing the money in Umoru's office, even as it was kept in a safe.

In another incredible story, she claimed that a mermaid appeared to her in her bedroom to attack her at various times and that her house maid is a witch.

Real trouble started for Umoru and Chieshe with the coming on board of Professor Ishaq Oloyede as JAMB's registrar, who set up a reconciliation committee to look into the accounts of all the state offices. This committee unearthed monumental stealing.

With no objections from counsel to the defendants, the prosecution tendered the report of the reconciliation committee and its summary, which Justice Affen admitted in evidence.

Under cross-examination by Mark Fees, counsel to Chieshe, Obilo said each of the e-facility cards, change of course forms and other cards are sold at N1000 per unit, disclosing that Umoru was the coordinator of the sales at that time in his capacity as the chief accounting officer of the Board's Makurdi Office and had the record of every cards that were delivered to the office and the proceeds realised from the sales.

Responding to Chieshe's claim that she made some payments into the Board's account but has lost the tellers, the witness revealed that the bank statements which were traced for confirmation of the said payments did not establish any of such payments as claimed by the second defendant .

The trial judge adjourned the matter to January 21, 2020, for continuation of trial.
Top Stories