The Nigerian army has reportedly declared as many as 22 soldiers wanted for 'running' away from Boko Haram. 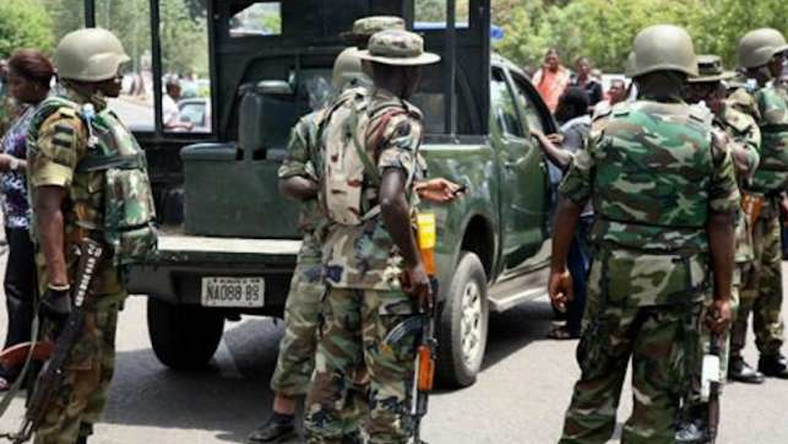 File photo
The Nigerian Army has accused one major and 21 soldiers of fleeing from the scene of a Boko Haram attack and subsequently declared them wanted, military sources said.

The soldiers were declared as deserters bound to face dire consequences if found, PREMIUM TIMES learnt from military commanders who demanded anonymity because the disclosure was not authorised.

The soldiers were said to have fled from the scene of a Boko Haram attack in Gubio, a community in Borno State now partly controlled by insurgents, on September 29. Reports said 18 soldiers were killed during the attack on a military outpost in the community.

The Nigerian Army did not confirm the attack or acknowledge own casualties, but senior officers began immediately working to establish the level of resistance or damage from troops during the attack. In the aftermath, 22 soldiers were unavailable without immediate indication that they were missing in action or seized by Boko Haram.

It was unclear whether the alleged desertion of the major and his men was informed by previous threats from Tukur Buratai, the head of the Nigerian Army, that soldiers would be severely punished if they abandon positions during a Boko Haram attack. Mr Buratai repeated the warning in June, accusing some soldiers of exhibiting an alarming level of cowardice that had made it difficult to win the 10-year war against insurgency.

It was unclear how many soldiers were manning the outpost in Gubio at the time insurgents struck at about 4:30 p.m. on September 29, but military sources said the soldiers so far believed to have deserted were 22.

They were all accused of absconding from duty to an unknown destination and should be arrested if found and returned in military escort to face disciplinary action.

Allegations of desertion remained a recurring feature in the Nigerian Army since Boko Haram counter efforts became the single most challenging task for the Nigerian Army at the start of the decade. In September 2014, about 400 soldiers sought refuge in Cameroon after fleeing a Boko Haram attack on Nigerian soil.

More than a dozen allegations of desertion involving hundreds of soldiers had been formally raised by the military within the same period. Five soldiers were declared wanted in July after making away with what military sources said was over N1 billion in cash.
A spokesperson for the Nigerian Army, Sagir Musa, declined comments to PREMIUM TIMES about the latest situation involving 22 soldiers.
***
Source: PREMIUM TIMES
Top Stories