A correspondent gathered that the school later set up a committee to look into the matter and subsequently came out with a report to suspend the student. 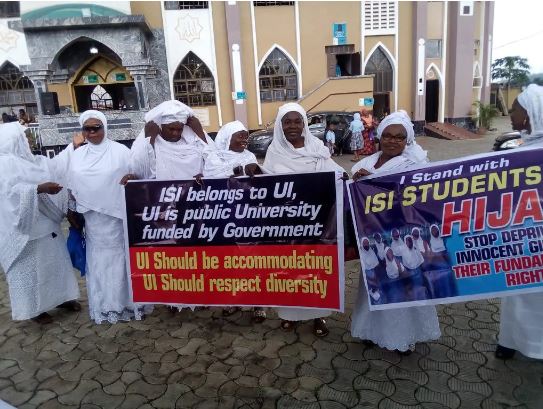 Protesters
The University of Ibadan International School, Ibadan, has suspended a female Muslim student, Miss Ikhlass Olasubomi Badiru for wearing Hijab (headscarf) in July this year.
The two weeks suspension according to a letter, signed by the School Principal, Phebean Olowe, a copy of which was obtained by DAILY POST Wednesday, takes effect between 7th and 18th October, 2019.
DAILY POST recalls that Badiru’s father, Dr. Idris Olabode Badiru, had in July, raised alarm over what he termed as molestation and inhuman treatment of his daughter, Ikhlas Badiru, by the Principal of International School, University of Ibadan, Mrs. Phebean Olowe, the School Accountant identified as Mr. Odewale and other staff of the school for wearing Hijab on top of her school.
The Muslim parents forum in the school through its Chairman, Alhaji Abdur-Rahman Balogun and Secretary, Hajia Bilkis Badiru, wrote petitions to the National Human Rights Commission (NHRC) and the Director General of the Department of State Service (DSS) urging them to investigate the matter and call those molesting the students to order.
A correspondent gathered that the school later set up a committee to look into the matter and subsequently came out with a report to suspend the student.
Principal of the school, Phebean Olowe in the letter entitled, “Letter of Suspension”, signed on Monday, 30th September 2019 and addressed to Badiru, insisted that the disciplinary committee looked into Badiru’s action and found her guilty of act of impudence to the school authority.
Olowe in the letter said, “At the meeting of the Students Disciplinary Committee (SDC) looking into students’ misconduct held on Wednesday 28th August, 2019, you were found guilty of act of impudence to school authority.
“Your action contravenes the school’s rules and regulations. Therefore, you are to serve two weeks full suspension effective from 7th September 2019 to 18th September, 2019.
“Also, you and your parents shall be expected to report to the counsellor on Monday 21st October 2019 to present a written undertaking to the school to obey rules and regulations throughout your remaining days on the school.”
Top Stories