Three men who swapped a man's sim card without his knowledge before stealing N7 million from his account have been apprehended. 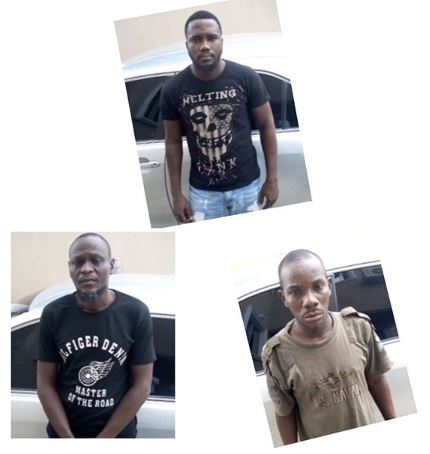 The suspects
Operatives of the Economic and Financial Crimes Commission, Makurdi zonal office, has arrested three suspects for conspiracy and obtaining money by false pretence to the tune of N7, 107, 540.00.
The suspects - Adewuyi A. Adebayo, 31; Osikoya K. Gboyega, 44 and Akintunde Ogunrinde, 47- were arrested on September 9, 2019.
They were arrested at different locations in Lagos State and transferred to Makurdi, Benue State.
The petitioner alleged that on 18th of February, 2018, he noticed his MTN line had stopped working as no calls or messages came to his phone and the phone displayed a message saying, 'invalid SIM card'.
He went to the MTN office to lodge a complaint but was told to apply for a welcome back SIM that was not successful as someone else had swapped his SIM card in Abia State.
He immediately contacted his account officer at FCMB to inform them of the development and to change his alert phone number to another line only to discover that transactions had occurred on his account without his consent.
The threshold limit for online transfers on his account had also been increased above N500k and the sum of N7,107,540 removed from his account.
Further investigations revealed that the suspects masterminded the alleged the fraud. The suspects will soon be charged to court as soon as investigations are concluded.
Top Stories

Landlord, Wife Beat the Hell Out Of Tenant Who Refused to Vacate Her Apartment After Quit Notice (Photo)
Recent Stories