A pastor has finally opened up on why he decided to kill his girlfriend of five years in Enugu. 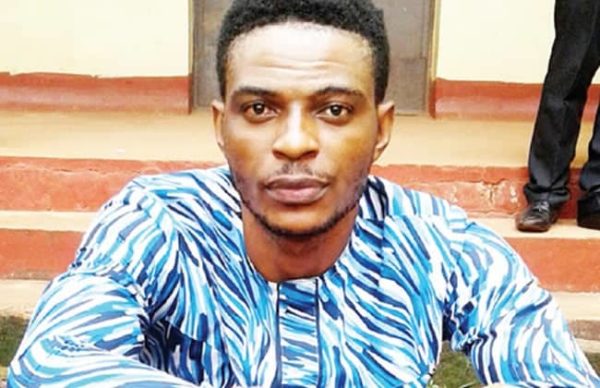 Pastor Chukwuemeka Eze
The General Overseer of Royal Priest Ministry, located at New Artisan Market, Enugu, Pastor Chukwuemeka Eze, has finally confessed why he murdered her lover and collected all her money including properties before he was arrested by the Police.
Information gathered revealed that Pastor Eze said he was tempted to kill her after he discovered that she had huge sum of money and landed property, so the drive to kill her and take over the whole thing came over him.
Eze was among fifteen suspected criminals paraded by the Enugu State Police Command for allegedly killing his girlfriend, collecting two million Naira cash that was with her on that fateful day and thereafter taking possession of her landed property documents and other things.
He confessed he committed the crime and attributed it to the work of Satan. He said he hit her with a stick as they quarreled over an issue and that it was not his intention to kill her.
The acclaimed Pastor, who hails from Obollo Etiti in Udenu local Government area of Enugu State, disclosed he had been into an intimate relationship with the deceased (name withheld) since the past five years and hid it from the members of his church.
The Enugu State Commissioner of Police, Ahmad Abdul Rahman, who briefed newsmen, said the acclaimed Pastor committed the crime on July 15, 2019 and hid it to himself. But Police investigations revealed that his action was deliberate since he collected the sum of two million Naira which the deceased had with her on that particular date after killing her.
Thereafter, he started the process of taking over her landed property documents.
The Enugu State Commissioner of Police, Ahmad Abdul Rahman, said the matter will be charged to Court as soon as the Police completes their investigation.
Top Stories