Two women have disgraced themselves after they fought publicly over a man in Lagos. 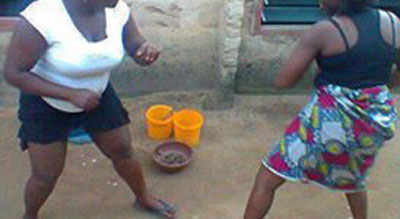 File photo
A 22-year old lady, Titi Rashidat and 49-year old single mother, Blessing Nwora, have engaged themselves in public brawl over a 62-year old lover, identified as Sikiru Atanda.
It was gathered that the incident happened at Edogaje Street, Daleks area of Ejigbo, Lagos.
According to a report by PM Express, the fight degenerated to the point of both women pouring their urine on each other before the Police team from Ejigbo Division led by CSP Olabisi Okuwobi arrived the scene and arrested the two suspects for affray.
It was gathered that the single mother, Blessing, confronted her lover, Atande, over his relationship with Titi and accused him of sleeping with the younger Titi while he pretended that he was dating only Blessing.
Blessing was married before but got separated from her husband and started living on her own before she met Atanda in the compound and they became lovers.
However, Blessing observed that Titi was also sneaking into Atanda’s apartment whenever she was not around and confronted Atanda over the affairs with Titi.
It was learnt that Titi heard when Blessing mentioned her name, so she later went to Blessing’s apartment, hit her door and asked her to come out for a fight.
Infuriated by her constant hitting on the door, Blessing then came out with a bucket of her smelling urine and poured on it Titi`s body.
In reaction, Titi solicited for her neighbours urine in a bucket, targeted Blessing and poured it on her which resulted into a public fight before the Police intervened. Both of them were arrested and detained at the Ejigbo Police Division for their show of shame in the public.
When P.M.EXPRESS correspondent visited the station, the suspects were seen writing statements over their conduct in public.
When the DPO, CSP Olabisi Okuwobi, was contacted over the the incident, she confirmed it but declined to make further comments on the matter and referred our reporter to the Police Public Relations Officer, DSP Bala Elkana.
However, sources at the Police Station, who confirmed the incident, said that the suspects will be charged to Court after the conclusion of investigation.
Top Stories