Mourinho To Replace Zidane At Real Madrid On One Condition


Mourinho, who spent three seasons at Real Madrid, won one La Liga title during his time at the club. 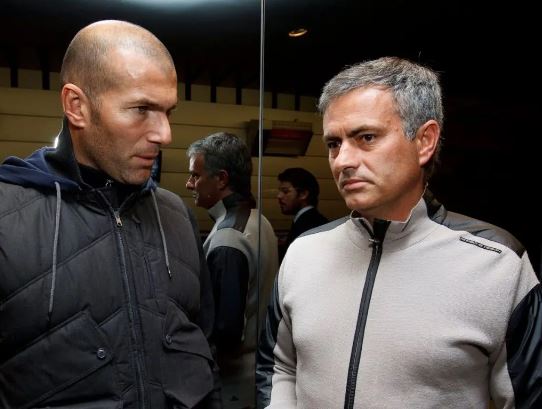 Zinedine Zidane, Jose Mourinho
Former Chelsea and Manchester United manager, Jose Mourinho may replace Real Madrid coach, Zinedine Zidane at the Santiago Bernabeu on one condition.
According to Sportsmole, Mourinho will take over from Zidane if the Frenchman fails to beat Barcelona at Camp Nou in the La Liga EL Clasico fixture on October 26.
The newspaper reports that Real Madrid president, Florentino Perez, has been in contact with Mourinho, who was in charge at the Bernabeu between 2010 and 2013 over the last few weeks about potentially stepping into the position.
Mourinho, who spent three seasons at Real Madrid, won one La Liga title during his time at the club.
The 56-year-old has also managed in Italy as well as in his native Portugal with FC Porto.
Mourinho’s last managerial job was with Manchester United where he was sacked in December.
The Portuguese was close to tears during an interview a few weeks ago as he admitted he missed football.
Mourinho said: “I miss my football, I have the fire. The most difficult thing for me is to say “no” to the possibilities I had to work.
“I have to be patient and wait for the right one and the right one is one at the dimension of what I am as a manager.”
Top Stories