Lille Laughing To The Bank With 72million Pounds Pepe


The former Gunners defender admits a club-record signing has failed to deliver, but he has been impressed by ex-Celtic full-back Kieran Tierney. 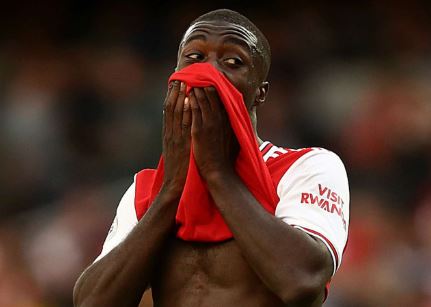 Nicolas Pepe
Lille are “laughing all the way to the bank” when it comes to Nicolas Pepe, says Martin Keown, with Arsenal considered to have overpaid for an underperforming £72 million ($89m) forward.
The Gunners moved to make the Ivory Coast international their club-record signing during the summer transfer window.
Pepe arrived with a blossoming reputation, with the 24-year-old conceding that he had the pick of Europe’s top sides. Big things were expected of him in north London, but the flying winger has flopped to this point.
Just one goal has been recorded across nine appearances, and even that was a penalty handed to him by Pierre-Emerick Aubameyang.
Another blank was drawn as Arsenal eased past Standard Liege 4-0 in their latest Europa League fixture, with Keown conceding that Pepe is providing little value for money.
The ex-Gunners defender told BT Sport: “If you think back to Arsene Wenger, he would never have blocked the path of a young player but they are in danger of doing that with Bukayo Saka.
“Pepe, is he going to get into the team? It's a massive amount of money they have paid for him and Lille will be laughing all the way to the bank with that one.
“It's still early days and maybe the player will turn it around but I haven't really seen what I expected to see from him.”
While criticising the impact made by Pepe, Keown has been impressed by fellow new arrival Kieran Tierney.
The Scotland international left-back has been eased into the fold after arriving from Celtic nursing an injury, but has now taken in two appearances and is considered to be putting Sead Kolasinac under serious pressure for a regular starting berth.
Keown added, with the talented 22-year-old picked out among a number of impressive displays against Standard Liege: “I said when I saw the team how promising it was.
“Some really good performances, particularly Tierney, [Hector] Bellerin maybe not quite ready.
“[Gabriel] Martinelli up top, really good for the club, great signing he looks like, really promising.
“But Tierney looks the closest to pushing his way, forcing his way, into the team, a bit early for Bellerin.
“[Rob] Holding as well, nice and solid, I like the midfield, [Joe] Willock, [Lucas] Torreira, there’s cases for them maybe forcing their way into the Arsenal first team. Competition for places is what Emery wants.
“I was out of my seat a few times for Tierney on that left-hand side. Kolasinac is under pressure and, when players are under pressure, that’s when they have to perform.
“Holding as well, wherever you look in that Arsenal performance, it’s really promising for the rest of the season.”
Top Stories