We're Discussing With Bandits To End Violence In North-West - Masari


Governor Aminu Masari of Katsina State talks about ongoing discussions with leaders of bandits terrorising the North-west to ensure peace. 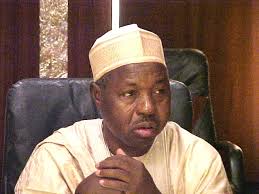 Governor Aminu Masari
Governor Aminu Masari of Katsina State at the weekend explained on following the failure of force explained that that ongoing discussions with leaders of bandits terrorising the North-west of the country is aimed at stopping the escalating violence in the region, pointing out that dialogue has become an option following the failure of force.

Besides, he told THISDAY, the discussions had shown that the bandits had understandable reasons for their actions, explaining that government felt that it was better to address their issues in order to find a lasting solution to the violence that had claimed many lives and property in the region.Consequently, he said, a delegation of government officials from Niger Republic and their counterparts from Nigeria are billed to meet tomorrow with leaders of bandits from the two countries in Jibia Local Government Area of Katsina State, to brainstorm on how to end cross-border banditry and other nefarious activities bedeviling the two countries.

Tomorrow’s planned meeting is against the backdrop of the recent  attacks carried out by bandits from the neighbouring Niger Republic on Katsina, Zamfara, Niger and Kaduna states, despite the closure of the borders and the peace deal between the bandits and some northern states.

Masari, who spoke in an exclusive interview with THISDAY at the weekend, said the meeting, which is in furtherance of his peace initiative, would also review the various approaches so far taken at individual country levels with a view to fine-tuning, re-strategising and strengthening them for enduring peace in the two countries.

This is coming as the Ekiti State Governor, Dr. Kayode Fayemi, has restated his support for state police and the need for the country to adopt multi-level approach in tackling security challenges, urging government to develop enduring national security policies.

Masari said the one-day security meeting would have leaders of the bandits from the two countries, security chiefs, government officials and other critical stakeholders as participants.

He said the meeting would be followed up with another meeting between the Governor of Maradi region in Niger, Mallam Zakari Oumoru, and him on how to implement the agreements.

The governor added that hundreds of bandits from Niger Republic had crossed over to Nigeria, stressing that most of them do launch deadly attacks on Katsina State and escape to their home country.

Masari, however, said the peace and reconciliation initiative he introduced in his state had started yielding good results, adding that the increased level of inter-border banditry and kidnapping might truncate the success of his peace efforts, hence the meeting.

He told THISDAY: “This peaceful approach is expected to take centre-stage at our discussion during the meeting, because it is a known fact globally now that through peaceful process, a lot can be achieved.“Bandits from Niger Republic have crossed over to Nigeria. Some are committing the crime here; some have base here and do go and commit the crime in Niger Republic and come back to Nigeria; that is why in continuation of our peace process we met with the governor of Maradi, Sokoto, Zamfara and me in Maradi with our security chiefs.

According to him, the outcome of the meeting would enable him to meet with the Governor of Maradi State, Alhaji Zakari Oumoru, to put an end to the menace just as he expressed optimism that normalcy would be restored in the two countries after the meeting.

“Now we don’t have banditry attacks in Katsina State; all the attacks are being carried out by bandits in Niger Republic. So, in this meeting we will ensure that the bandits carrying out these attacks are brought to book for peace to return in the two countries,” he stated.

He said his state, which had been in the news in the past due to armed banditry, kidnapping, cattle rustling and other crimes, had started enjoying relative peace, stressing that roads, villages and markets that were virtually taken over by bandits have reopened and resumed normal activities.

Meanwhile, Fayemi has stressed the need for the country to adopt a multi-level approach in tackling security challenges, urging government to develop an enduring national security policy.

The governor, at a public lecture entitled: “Perspectives on Security Challenges in Nigeria from 1999 to 2019: The Way Forward,” organised by the Yoruba Tennis Club in Lagos to mark its 93rd anniversary, said it had become imperative for government to look at other mechanism, in addition to military, in addressing insecurity intervention.

In a statement yesterday by his Chief Press Secretary, Mr. Yinka Oyebode, Fayemi said Nigeria must consider decentralising security and law enforcement from the federal to state down to the community.

He added that partnership in the security sector and inter-agency collaboration must be encouraged to bring about effective policing of both land and coastal regions of the country.

The governor called for a reform of the Nigeria Police Force in line with what is obtainable from the criminal justice system by strengthening its capacity to carry out investigations without political interference.

He said: “From a strategic point of view, it is necessary that the military’s role as an elite specialist weapon of last resort be fastidiously preserved while we leverage other resources and tools that are part of the security sector’s arsenal. This means re-tooling, re-training and re-arming the police force – much neglected in the scheme of security planning and recognising their premier role in the field of law enforcement and the first line in national security management.

“Effective policing in a democratic environment requires the civilianisation of the service. The portrait of the Nigerian police officer wielding an assault rifle is an unflattering portrayer that conveys the impression that it is a military unit and entrenches a misconception of identity in the minds of the police operatives themselves.

He said no reform of the police force would be complete without a corresponding wide-ranging reform of the nation’s weak criminal justice system, explaining that prosecutors, the judiciary and the correctional institutions were strategic partners with the police service in the law enforcement and security architecture.

“Thus, for example, strengthening the capacity of the police to carry out investigations will count for very little if the accused can be released from jail for political reasons,” he said.

Fayemi said over 10 million small arms and light weapons are traceable to West Africa with Nigeria having the largest number. This, he added, accounted largely for the security challenges being experienced in many parts of the country.

“The proliferation of small arms is partly the concomitant effect of the weakening of states in the post-cold war era. The world has become awash with small arms and light weapons since the collapse of the Soviet Union. Indeed it is estimated that over 10 million of such weapons are traced to West Africa according to the Small Arms Survey,” he said.

The governor explained that the region’s most recent crisis had been caused by a convergence of drought, food insecurity, ecological degradation, political instability, conflict and the large number of internally displaced people and refugees.

He explained further that the problem of weak states had permitted a number of non-state actors, including gangs, arms dealers, rebel groups, drug dealers and terrorists to flourish in the region.

“Added to this is Nigeria’s extensive and porous borders covering over 4,000 kilometers littered with illegal entry points and routes totaling 1,500 points. With the porous borders, criminal gangs and terrorist insurgents easily smuggle weapons into the country, which in turn are sold to Niger Delta oil bunkerers, South-east kidnappers and other purveyors of violence in the Nigerian state,” Fayemi said.

He also spoke about maritime security, saying it was not only important in terms of protecting the exploitation of maritime resources, particularly, off-shore oil, but also in terms of securing livelihoods and development.

Piracy,he pointed out, was a growing phenomenon in our coastal waters and posed a serious threat to security in the sub-region.

Fayemi added that security should be taken as everyone’s concern because: “Securing our communities means that infrastructure and urban planning must be guided not only by environmental impact assessment reports but also by security considerations.”
Top Stories