What Nigeria Is Losing For Killing Mountain Gorillas - Expert


The professor also called on the Akwa Ibom State Government to take advantage of the numerous endemic wildlife species found in the state. 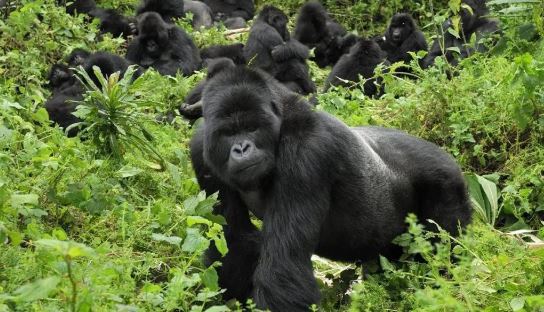 File Photo
A professor of Wildlife Resources Management, Herpetology and International Management consultant, University of Uyo, Akwa Ibom State, Edem Eniang, has lamented the rate at which mountain gorillas are being hunted as bushmeat in Nigeria.
He regretted that instead of government making conscious efforts to generate ecotourism traffic from viewing of such gorillas, their very species which are endemic to Nigeria are being hunted and their habitat destroyed.
Eniang who stated this in his office in Uyo, the state capital on Friday, said Nigeria despite being the third richest country in terms of primate species diversity in Africa, was yet to harness the enormous potentials from the sub-sector.
He said while countries such as Uganda, Rwanda and Congo DRC are earning billions of dollars in foreign exchange from mountain gorillas based eco-tourism alone, Nigeria with its very rare and critically endangered species of gorilla globally recognised as Cross River gorillas which is a distinct sub-species of Western Lowland gorilla and endemic to Nigeria /southwestern Cameroon are being hunted for food as bushmeat.
According to Enaing, “Nigeria is losing billions of Dollars for not making conscious efforts to develop the wildlife-based eco-tourism subsector.
In Uganda, an average of one thousand dollars is paid per person on the average to view mountain gorillas for just an hour.
“But Nigeria has a unique species of gorilla, that is, the Cross River gorilla found in four localities of Cross River State namely; Afi mountain wildlife sanctuary, Mbe mountain, Okwangwo sector of Cross River National Park and Obudu escarpment near the Obudu Cattle Ranch/Resort though down at the moment.
“So what conscious effort has the relevant governments/agencies made at the moment to generate eco-tourism traffic of the country based on this critically endangered great ape?
“We must appreciate the fact that this all-important species of Ape have been given to us as heritage, rather people are shooting them and destroying their habitats instead of conserving them to generate much-needed revenue as done in some parts of East and Central Africa.”
The neglect of the sector, the professor said has scared away potential investors, adding that a Japanese Primate Research Organization had invested in many countries of Africa such as Uganda, Congo DRC and Rwanda for up to 60 years in gorillas and Chimpanzees, shunning Nigeria and indeed West Africa with rarer species of those great apes.
He called on both the Federal and state governments and relevant agencies to take urgent positive steps and take stock of all the globally important wildlife species and draw a Nigeria eco-tourism map that shows direction and pinpoint the localities of all the site of eco-tourism potentials as well as how to access them.
The Professor also called on the Akwa Ibom State Government to take advantage of the numerous endemic wildlife species found in the state and establish either a Biosphere or Game reserve to boost Wildlife conservation and Eco-tourism in the state.
Top Stories