Reacting to the allegation, Atiku while condemning the act, called for systemic strategies to put a deterrence to such behaviour. 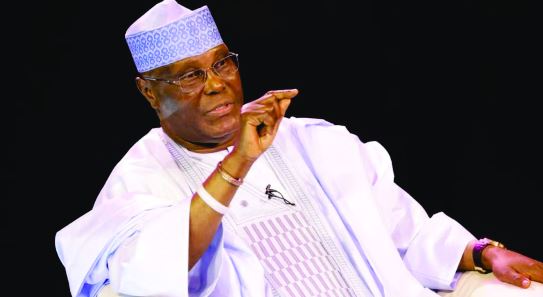 Atiku Abubakar
Atiku Abubakar, the presidential candidate of the Peoples Democratic Party (PDP) in the 2019 general elections has reacted to viral video of University of Lagos (UNILAG) lecturer caught on camera demanding s*x from an “seeking admission.
It was reported that the lecturer, Boniface Igbeneghu, is a former sub-dean of Faculty of Art and head pastor of local Foursquare Gospel Church.
His advances were captured in a 13 minutes video by BBC Africa.
The undercover journalist, Kiki Mordi, disguised as a 17-year-old admission seeker.
Igbeneghu disclosed that there is a place lecturers take female students to have fun – UNILAG Staff Club. “They call the place cold room,” he added.
Igbeneghu, at the first meeting was quoted as saying, “Don’t you know you are a beautiful girl? Do you know I am a pastor and I am in my 50s but if I want a girl of 17 years, all I need is a sweet tongue and put some money”?
At the second meeting, he prayed with the journalist and later asked: “What age do you start knowing men. Be assured that your mother will not hear.”
Reacting to the allegation, Atiku while condemning the act, called for systemic strategies to put a deterrence to such behaviour
He wrote on Twitter, ”I have just read the story on #SexForGrades across public tertiary institutions in many West African countries. This is unacceptable, and requires systemic strategies to put a deterrence to such behaviour.
”As a society, we cannot allow a trend that is psychologically abusive to young women to thrive. In fact, that’s a direct opposite of what a sound educational system represents.”
Top Stories