Pastor's Wife Commits Suicide While Husband Was On Evangelism In Lagos


A pastor's wife has taken her own life after being frustrated by life in Lagos. 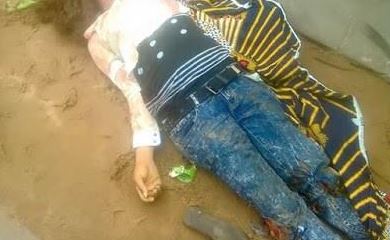 File photo
A mother of three, identified simply as Mummy Pelumi, has reportedly committed suicide at Mangoro area of Lagos State, according to a report by NewTelegraph.
The woman, a pastor’s wife, took her life when her husband was on evangelism.
Witnesses said the deceased and her children were sleeping in their one-room apartment at Sule Street, Mangoro area of the metropolis, when she hanged herself to a ceiling fan in their room on Friday, September 4 It was learnt that it was when the woman’s children woke up that they saw their mother dangling on their ceiling fan.
They then raised the alarm which attracted neighbours and some mechanics. Mummy Pelumi’s mother-in-law, who gave her name as Madam Modupe, said the death of her son’s wife came to her as a surprise. Madam Modupe said that on Friday, before she left for vigil, the deceased was the one who cooked the food everyone ate.
She said: “When we were eating, she told me she just stocked her shop, because of the social activities in our area on Saturday, so that she would not disappoint her customers who might want to buy drinks from her.
“After the vigil, I was still at the church resting when someone came to call me that my son’s wife had killed herself. By the time I rushed down, a crowd had gathered at our house. My son is a pastor and he had gone on evangelism, we decided to leave the deceased till Sunday believing she was going to come back to life.
“I was with her in the room throughout the period monitoring her closely believing that she was going to stand up. But when I noticed she had gone, it was then I called the pastors from our church who came to perform the funeral and she was buried on Sunday.”
The woman said they were about to buried her when the husband arrived from his evangelism trip. She added: “It was painful, because she was a nice woman to me and everyone that came across her. It is the neighbours who helped me to pacify the husband because he was just crying.
One of the neighbours, who gave her name as Blessing, said Mummy Pelumi’s death was painful to everyone in the house. Blessing said they were all sleeping when suddenly the first daughter of the deceased rushed out of their apartment and called neighbours to come and look at her mother.
She said: “When we got to their apartment, her tongue had come out of her mouth. The children were asked to leave and the door was locked. Policemen from Isokoko were informed.”
Top Stories