According to Bala, the fatal accident involving 13 persons, also left 8 others severely injured. 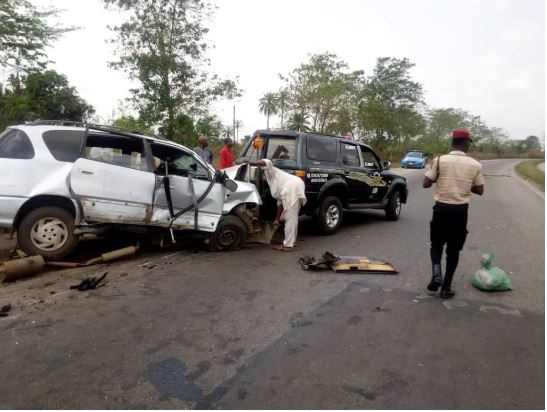 File Photo
Accident involving an articulated vehicle and a Volkswagen Sharon bus at Hawan Kibo area of Plateau left five persons dead.
Mr Andrew Bala, Public Education Officer of the Plateau Command of the Federal Road Safety Corps (FRSC), confirmed to News Agency of Nigeria (NAN) on Wednesday in Jos that the crash occurred on Tuesday night.
According to Bala, the fatal accident involving 13 persons, also left 8 others severely injured.
He attributed the crash to speeding and brake failure on the part of the articulated vehicle.
He said, “Yesterday night, our unit command at Hawan Kibo received a distress call that an accident involving a truck and Sharon vehicle occurred at the road.
“The break of the truck, which was speeding, failed, and he landed on the Sharon bus.
“Our rescue team from the unit command responded swiftly but unfortunately, five persons lost their lives and eight others are severely injured.
“The dead bodies were deposited at Our Lady of Apostle (OLA) hospital, Zawan, while the injured are receiving treatment at Salama Hospital, Gidan Waya.”
Bala called on drivers to avoid speeding, wrong overtaking, use of phone while driving and other unwholesome attitudes while plying the highways.
He also advised motorists to ensure that their vehicles were in good condition before hitting the road, to avoid brake failure.
He further urged drivers in the state to drive with care, particularly during the ember months.
Top Stories