A man who murdered a naval commander has confessed how he brutally ended her life. 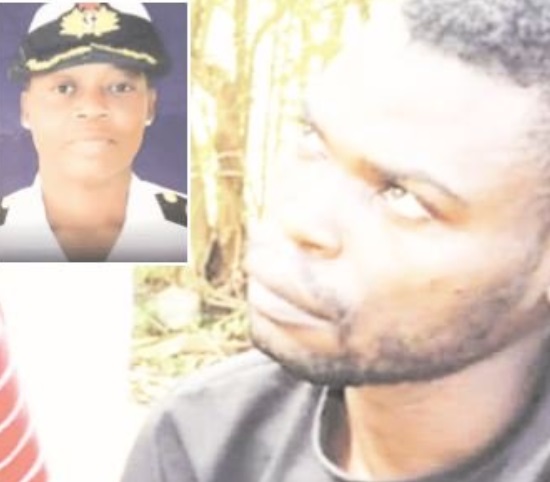 Bernard Simon confessed to killing Oluyemis Ogundana
Following his arrest, Bernard Simon, the suspected killer of Oluyemisi Ogundana, commandant of Command Secondary School at the Armed Forces Command and Staff College (AFCSC), Jaji, Kaduna, has recounted how he carried out the dastard act.
Ogundana's dismembered body was found inside a Ghana-Must-Go bag dumped inside a shallow well near Deeper Life Bible Church in Jaji Cantonment on September 22nd, days after she was declared missing. Simon who claims to have been in an amorous relationship with Ogundana who was married, was arrested after the person who he gave Ogundana' car to sell was arrested.
He was paraded before newsmen by the state Commissioner of police, Ali Janga, yesterday October 9th. He denied raping the deceased, he however said he killed the deceased because she was cheating staff members of the school.
“I killed her because she was cheating us in the school. I am a teacher in the school and she was cheating us as staff under her. I killed her to set the whole staff of the school free from her cheats.
“There are some financial benefit she deprived us of. She denied me in particular of over N100,000. That is why I killed her to set myself and other staff free from her.” he said
He confessed to throwing the mutilated body of Ogundana into the a shallow well.
The police said Ogundana will be arraigned in court soon.
Top Stories