According to sources, the list of the properties was discovered during the search on one of his relatives in possession of the titles. 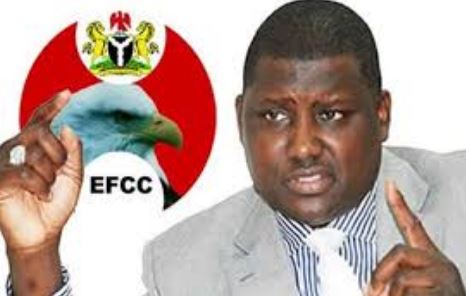 Abdulrasheed Maina
The Economic and Financial Crimes Commission (EFCC) has filed an application at the court for the forfeiture of 29 additional assets, worth N1.054 billion, traced to Abdulrasheed Maina.

Maina, the fugitive former Chairman of the Pension Reform Task Team (PRTT), was arrested in an Abuja hotel in September, when he sneaked into the country from his United Arab Emirates (UAE) base.

He was picked up with his son, Faisal, who pulled a pistol to prevent his father’s arrest.

Since his arrest, Maina has been undergoing interrogation at the EFCC.

Some foreign assets believed to belong to Maina have also been located in the UAE and other jurisdictions.

The government is set to invoke the Mutual Legal Assistance Treaty (MLAT) to seize Maina’s choice properties in the UAE.

Sources close to the investigators said other items retrieved from Maina and his son,  included about 31 SIM cards of UAE, MTN, 9Mobile and Airtel.
Also, between him and his son, “they were in possession of 19 handsets and each of the handset either has one SIM card or two/ three cards”.

Other items recovered are one iPad and two laptops.

The rest are a Nigerian passport and a UAE passport for Faisal Abdulrasheed Maina; ATM cards/ cheque books both for Nigerian and UAE banks being used by Maina and charms, including a traditional jacket (top) with charms and in their luggage.”

The source gave an insight into Maina’s offshore investments and assets. He said there is documentary evidence linking Maina to companies in the UAE and Nigeria through his son. The father’s name does not appear in the profile of these companies but the son’s name does.

A luxury and car rental company Northridge Rent A Car in Dubai, have been undercovered a cleaning service firm  – Spotless and Flawless International, also in Dubai.

Maina has also admitted the ownership of Ostrich Oil and Gas Company, the source said.

The source added that EFCC detectives have “located many accounts operated by Maina but opened in different names.

“For example, he got the Bank Verification Number (BVN) of his sister, Fatima Abdullahi, and opened an account with it. But it is Maina that is signing the cheque, to withdraw money from the account. The sister was not aware of the existence of the account until Maina was arrested.

According to sources, the list of the properties was discovered during the search on one of his relatives in possession of the titles.

The source said: “Maina has filled the asset declaration form and he did not declare these properties which he brought in different names.

“Our investigations showed that many of these properties were paid for in cash. For instance, he paid N100 million for a property on 16A Katuru Road, Kaduna.

“EFCC detectives succeeded in linking the assets to Maina from the Deeds of Sale and other documents. We were able to compute the cost of 29 properties at over N1billion.
”With his denial of ownership of these assets, we have already filed an application in a High Court for their forfeiture to the Federal Government,” the source said.

Sections 28 and 34 of the EFCC (Establishment Act) 2004 and Section 13(1) of the Federal High Court Act, 2004 empower the anti-graft agency to invoke Interim Assets Forfeiture Clause.

Section 28 of the EFCC Act reads: “Where a person is arrested for an offence under this Act, the Commission shall immediately trace and attach all the assets and properties of the person acquired as a result of such economic or financial crime and shall thereafter cause to be obtained an interim attachment order from the court.

Section 13 of the Federal High Court Act reads in part: “The court may grant an injunction or appoint a receiver by an interlocutory order in all cases in which it appears to the court to be just or convenient so to do.

“Any such order may be made either unconditionally or on such terms and conditions as the Court thinks just.”

Besides the 29 assets newly discovered, on December 9, 2017, the  Acting EFCC Chairman Ibrahim Magu, said seven properties had been seized from Maina.

The properties are a two- storey commercial building located on Ibrahim Taiwo Road, a bungalow located on Katuru Road and four separate properties located on Kano Road in Kawo New Extension, all in Kaduna. The other property which is still under construction is a set of four one-storey block of flats located at No. 5, Sokoto Road adjacent to the Zamfara State Governor’s Lodge, Kaduna.

He said: “Maina had a total inflow of over N2.7 billion between 2010 and 2013, with 95 per cent of the deposits being in cash. It was discovered that Faizal Abdullahi’s Account (his son), had a turnover of over N1.5 billion in less than a year.”
Items recovered include:
32 SIM cards
(UAE&Nigeria)
•19 handsets
•One i-Pad
•Two laptops
•13 flash drives
•U.S. ID card
•UAE naturalisation
certificate
•Nigerian passport
•Bank documents
•Charms
Top Stories