It was an emotional time for many on Thursday as Emir of Kano, Muhammadu Sanusi II wept over an incident. 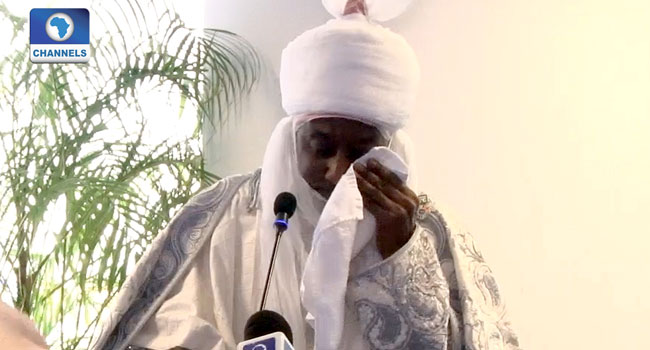 Emir of Kano, Muhammadu Sanusi II
The Emir of Kano, Muhammadu Sanusi II, shed tears on Thursday as he decries the alarming rate of inequalities in the country, Channels Television has reported.
According to him, the inequalities in society have caused so much hardship with the poor paying the ultimate sacrifice.
The traditional ruler made the submission as he gave an emotional address at a United Nations meeting to reach Sustainable Development Goals in Lagos.
He sobbed as narrated an unfortunate situation where a mother could not save her sick child, despite being close to getting help.
Sanusi told the gathering at the event that on that fateful day, the woman had walked to the palace from a children’s hospital located just about 200 metres.
According to him, he heard a very loud scream and asked someone to check what happened while the person who came back with tears in his eyes.
The emir said the baby died in the mother’s arms while she was waiting for her turn to ask for money to buy the drug to save her child.
“And how much was this? It was less than five dollars,” an emotional Sanusi said.
He added, “This is what happens every day in this country. Children die because their parents cannot afford five dollars, that a mother will watch her child die because she does not have five dollars.”
Watch video below:
Top Stories