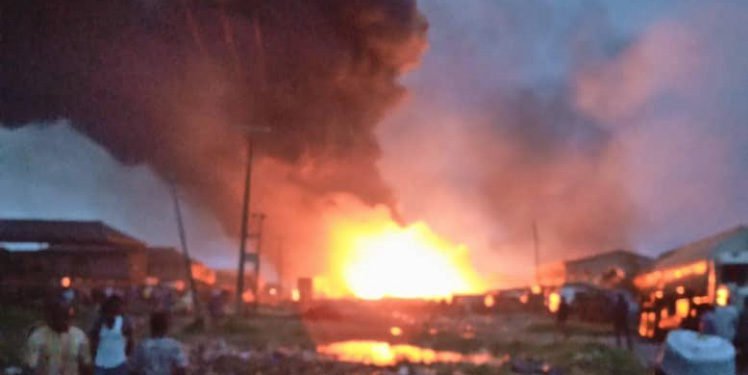 File photo
According to Punch Metro, the Nigerian Petroleum Development Company Limited, an upstream subsidiary of the Nigerian National Petroleum Corporation, on Friday reported a fire incident which occurred at its Oil Mining Lease 20 at Egbema-West, Imo State.

It said the fire incident started on Monday, October 7, 2019, and was being managed by fire fighters.

A statement by NNPC’s acting spokesman, Samson Makoji, quoted the NPDC Managing Director, Mansur Sambo, as saying that preliminary investigation revealed that a spark, which ignited the fire during a bunkering activity by vandals, might have caused the incident.

Sambo said the incident occurred in Well–18T, located within the flooded part of Abacheke community.

Further report released by the Community Liaison Officer in charge of Abacheke community indicated that no fatality was recorded.

NPDC stated that appropriate action to minimise the impact of the fire and ensure safety of the community had been taken.

The upstream company said following successful aerial surveillance carried out on Wednesday, October 9, the company was mobilising and employing the services of a reputable safety consultant to completely put out the fire.

NPDC advised members of Abacheke community and its environs to avoid the affected area and stay calm, promising to update the general public on the incident soon.
Top Stories