Updated: Man Arrested By Police Not Fugitive Frenchman Who Murdered His Wife And Four Children


DNA result has revealed that a man arrested by police in not the fugitive French man who disappeared eight years ago after murdering his wife and children. 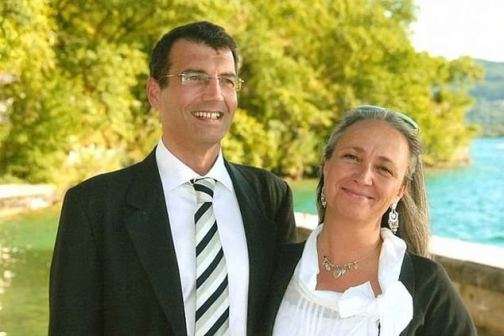 Xavier Dupont de Ligonnes and his wife before the 2011 murder and four children
A Frenchman arrested at Glasgow airport on Friday is not the suspected murderer Xavier Dupont de Ligonnes, the Daily Mail reported, saying DNA tests showed the police are holding the wrong person.
De Ligonnes was said to have gone ‘on the run’ after the bodies of Agnes, 48, and children Arthur, 20, Tomas, 18, Anne, 16, and Benoit, 13, were found buried in the garden of the family house in Nantes, western France, along with their two pet Labradors.
French judicial sources had said Friday that police at Glasgow airport had arrested Xavier Dupont de Ligonnes, who was subject to an international arrest warrant for the 2011 killings which transfixed France.
But on Saturday, sources close to the probe said a DNA test on the man being held in Scotland was ‘negative’.
The detained man was stopped in Glasgow after arriving on a flight from Paris after an anonymous tip-off, according to French sources close to the investigation.
Police Scotland had issued a statement saying: ‘On Friday the 11th of October a man was arrested at Glasgow Airport and remains in police custody in connection with a European Arrest Warrant issued by the French authorities.
‘Inquiries are ongoing to confirm his identity and we continue to liaise with our colleagues in the relevant agencies.’
Source: Daily Mail
Top Stories