After Spending Months Outside The Country, Aisha Buhari Returns To Aso Rock


Nigerian First Lady, Aisha Buhari has returned to the presidential villa some months after leaving Nigeria. 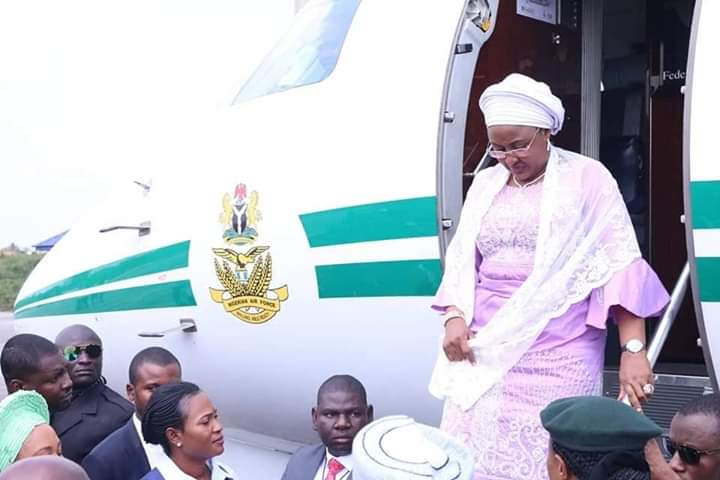 File photo: Aisha Buhari
The First Lady, Mrs. Aisha Buhari, returned to Abuja this morning two months after she left the country for the United Kingdom, ThisDay reports.
The president’s wife announced her coming back to Nigeria at about 8.56pm last night while leaving London.

Making the announcement on her Twitter handle, @AishaMBuhari, the first lady said Mrs. Modupe Oguntade, the wife of Nigeria’s High Commissioner to the United Kingdom, Retired Justice George Oguntade, was seeing her off.

“Wife of the Nigerian Ambassador to the United Kingdom, Mrs Modupe Oguntade seeing me off. Thank you so much madam,” she tweeted.

TheCable reported last night that Aisha left Nigeria in August for Saudi Arabia for lesser hajj and from Saudi Arabia headed for the United Kingdom.

According to the online medium, Aisha was in the United Kingdom for medical treatment.
Her stay in the UK for over two months had generated a range of controversies at home particularly at the height of rumours that her husband, President Muhammadu Buhari had planned to marry 44-year old Minister of Humanitarian Affairs and Disaster Management, Ms Sadiya Umar Faruk, on Friday.

Thus, proponents of the rumour claimed that Buhari was marrying a second wife because Aisha had opted to remain abroad for so long.
Top Stories