The father of two siblings who were burnt to death in Lagos has spoken up about the very sad incident. 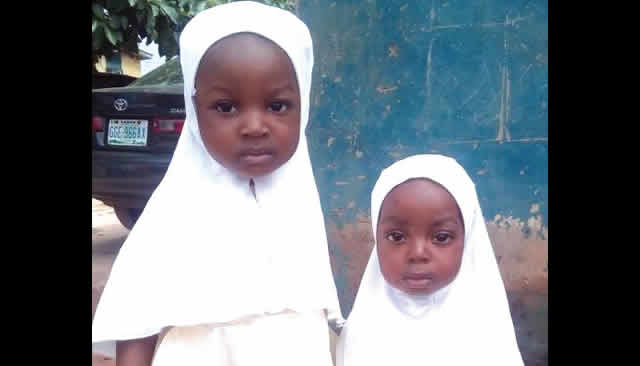 The siblings
Birthdays bring forth pleasant memories to relish as they are usually laced with pomp. A mechanic in the Ijede area of Lagos State, Mubarak Olaloluwa, had looked forward to making that day splendid for his four-year-old daughter, Ganiyat.

Together with his wife, Adesola, the 31-year-old planned to pay a surprise visit to Ganiyat’s school in the area on Tuesday, October 15 and throw a birthday party marking her fourth year on earth.

But 11 days off the D-Day, tragedy struck. In the early hours of Friday, October 4, the family woke up to a raging fire that engulfed their Olupawanpo Compound in Ijede, Ikorodu.

By the time the dust settled, the charred bodies of Ganiyat and her elder sister, Oyin, aged six, were brought as their parents bewailed the irreparable loss.

Sunday Special learnt that the fire, which broke out from a tailor’s shop in front of the building, was caused by an electric spark.

All the eight apartments in the building were razed as residents scampered for safety at midnight, watching helplessly as their valuables got burnt.

Our correspondent gathered that the fire raged on for hours before help came from men of the Lagos State Fire Service who eventually put it out.

Olaoluwa explained that noises from neighbours who raised the alarm over the fire woke him that night.

He said he became confused and was lucky to escape from the fire which was already at the entrance of their room.

He stated, “It was a strange voice, shouting ‘escape through the window’ that woke me up. By the time I was awake, the fire was everywhere. I was shocked. I quickly woke my wife who was sleeping beside me. Our last child, two-year-old Jamal, was on her chest. He was ill. By the time I opened the door, the fire was in our entrance. It was God that saved the three of us.”

He said the fire grew wild, making it difficult for him to rescue the two children trapped in the room.

“I broke the window glasses to see if I could rescue them from there, but the fire was already all over the room. We lost all our valuables but they were nothing compared to my children. My wife’s sewing machines, our appliances, clothes; everything was burnt. She sells footwear and she just bought goods a day before the incident happened. Everything is gone but I would have preferred to lose property and have my children alive,” Olaoluwa added.

Reliving the good times he had with his kids, the Lagos indigene said he and his children bonded so well that he could not have imagined a life without them being around him. In a croaky voice, he narrated his plans to make Ganiyat’s birthday an unforgettable one.

He recalled, “We were supposed to mark her four years birthday on October 15. I had plans on her birthday. I really wanted to surprise her teacher and schoolmates that day to make it a big surprise for her.

“After the celebration at the school, I planned to take her and her siblings out for shopping. It was unfortunate that God has made His own decision and there is nothing we can do about it. She was in Nursery two while her sister was in Primary One. They were very brilliant and I love them so much.”

Olaoluwa said he had been trying hard to soothe his devastated wife, who was inconsolable to speak with our correspondent. He added that he had accepted the tragedy in good faith.

“We still have to thank God for sparing our lives. We now squat with a Muslim brother pending when we will have money to rent an apartment. On Friday afternoon, one of my brothers gave Jamal money to buy something. He said he would buy for Oyin and Ganiyat too. They all love one another,” he added.

An uncle of the deceased, Danmola Ajani, said the poor state of roads leading to the area contributed to the delay in putting out the fire.

He lamented that some sympathisers broke the glasses of a car Olaoluwa parked in front of the building to remove a gas cylinder inside the vehicle so that it didn’t fuel the fire.

He said the sympathisers eventually ran away with the gas cylinder and some vehicle parts kept inside the car.

Ajani stated, “There was an electric pole in front of the tailor’s shop. Power was restored around 12 am with a high voltage which caused a spark in the shop. Probably, some electric connections there were on.

“As a former worker with the Lagos State Fire Service, I used my experience in the best way I could to rescue the situation. We could not get any borehole nearby to fetch water to extinguish the fire. It was water people had at home that we used in trying to put it out.

“Some youths went to the lagoon to fetch water which we used to extinguish the inferno before firefighters arrived and put it out. I called them long before they came. It is difficult to navigate this place because of the poor state of the roads.
***
Source: Sunday Punch
Top Stories