Boniface Igbeneghu: A Teacher As Scapegoat Of Uncontrolled Libido


Boniface Ighenefu, a UNILAG lecturer and pastor has been roped in a sex-for-grades scandal and many have called this 'nemesis'. 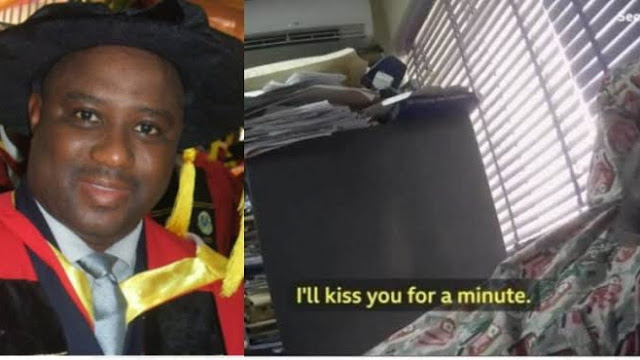 Boniface Ighenehu
Nemesis seems to have caught up with alleged sex-for-grades teacher, Dr Boniface Igbeneghu, a senior lecturer at the Department of European Languages and Integrated Studies, Faculty of Arts, University of Lagos (UNILAG), who doubles as the head pastor of the Foursquare Church in Lagos.

BBC’s Africa Eye had on Monday released a video documentary targeted at lecturers in some West African universities (Nigeria and Ghana as case study) who  harass their students for sex in exchange for marks/grades.

It took the BBC not less than one year to conduct the investigation after gathering dozens of testimonies from victims and eye-witnesses accounts to expose the bad lecturers who have remained a thorn in the flesh of female students, either of age or under-aged.

Igbeneghu, among a few other targeted ‘sinful’ lecturers, was exposed in the video where an undercover journalist, Kiki Mordi, all the while wearing secret cameras, disguised as a 17-year-old admission seeker into UNILAG to get confirmation to her story.

Igbeneghu, who invited the teenager to his office for a number of tutorials, at first, perhaps, “pretended” to have “led her to Christ” and subsequently began to have inappropriate and amoral conversations with her.

In the 13-minutes secret filming, the lecturer revealed how his colleagues tossed and passed around, among themselves, UNILAG female students for sex.

He disclosed further how his colleagues patronise UNILAG Staff club, which he described as “Cold room” to commit series of atrocities on female students.

It was gathered that the “Cold room” has been closed down, following the order from the university authorities.

Following the release of the tape that was met with tons of mixed reactions and a call for the suspension and probe of the indicted lecturer, Igbeneghu has taken to his Facebook page to deny the allegations of any wrongdoing.

In a Facebook post on his page, he alleged that the BBC set out to set him up as he is innocent and that his God is bigger than them.

He wrote: #BBC or whatever they call themselves set me up. My God is bigger than them.”

There is unconfirmed report in the media that as a result of the show of shame he has been pressured to face, Igbeneghu has attempted to commit suicide and was rushed to one Reddington hospital, where he is under supervision and recovering.

Mordi, a one-time victim of sexual harassment, revealed through the documentary what happens behind closed doors at some prestigious universities.

Although Mordi used two West African universities as a case study, Sunday Sun gathered that it may be quite difficult, if not impossible to exempt any tertiary institution from this shameful blight.

Expectedly, both UNILAG and the Foursquare Gospel Church parish have suspended Igbeneghu.

His church has issued a swift denunciation thereafter, asking him to “step down from all ministerial assignments”.

Also, UNILAG has vowed to tackle the issue with every sense of responsibility, and the seriousness it deserves.

Already a panel has been constituted headed by Prof Ayodele Atsenuwa, a professor of Public Law, Faculty of Law, with the mandate to probe into the allegations of sexual harassment leveled against Igbeneghu and Dr Samuel Oladipo  (Department of Economics) who was also featured in the second stream of the video entitled “Sex for Admission.”

A statement released by Mrs Taiwo Oloyede, principal assistant registrar (Communication Unit) of UNILAG has assured that “the whole process will be transparent and appropriate sanctions will be meted out to anyone found culpable.”

Like most Nigerians who condemned the alleged dishonest action of Igbeneghu, popular Nigerian singer, Timi Dakolo, who was equally irked after watching the footage of the video, took to his twitter and wrote: “Oga Pastor Boniface was even praying and calling Jesus, shouting welcome to the kingdom. Nowadays, when someone is saying I give God the glory, we need to ask which God?”

Chairman of the Academic Staff Union of Universities (ASUU), UNILAG branch, Dr Dele Ashiru described the scandal that has brought down the two of their colleagues, as unfortunate and tragic, just as he cautioned his colleagues to be wary of their actions not only on campus, but wherever they may go as perceived role models.

Unarguably, over the years, there have been issues of harmless female students being harassed for sex in return for marks in Nigerian universities.

It is today common knowledge that the sex-for-marks practice has become a reoccurring problem in Nigerian institutions, which over the years may have been encouraged by the university system as a result of the failure to appropriately sanction erring lecturers.

For her vision, boldness, moral fiber and courage to dare, perhaps where some will fear to tread, former Minister of Education, Oby Ezekwesili, on Thursday, named Kiki Mordi among other few leading women as role models for young women in Nigeria to emulate.

As days pass by, Nigerians are waiting to see how the case will be treated. The Senate is already proposing a five-year imprisonment law for culprits.

Already, First Lady, Aisha Buhari, says she supports punishment for offenders and has promised to throw her weight to ensure victims get justice.

It should be recalled that last year, a former lecturer of Obafemi Awolowo University (OAU), Prof Richard Iyiola Akindele was reportedly sentenced to two years in prison for sexually molesting female students.

As the trend appears to be getting messier, Nigerians seem to be unanimous in their call for meting out of appropriate punishment for offenders, as well as increasing the awareness programmes on the issue.

Boniface Igbeneghu is an associate professor at the University of Lagos (UNILAG). He was born in the mid-1960s to Edo parents.

He is currently trending worldwide after being captured on tape sexually harassing a female student in BBC’s sex for grades undercover.