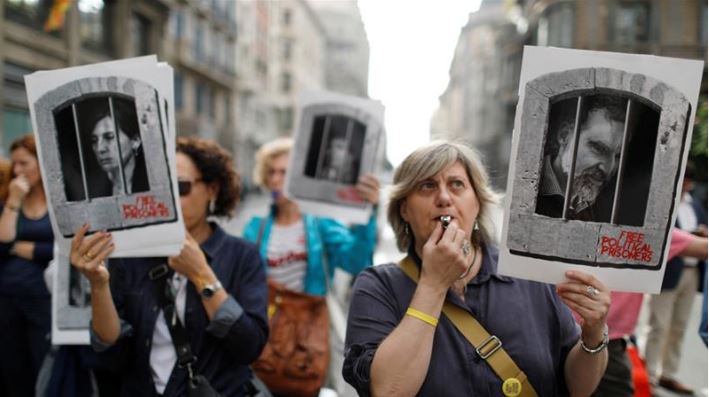 Protesters have hit the streets in north-eastern Spain after the country's Supreme Court on Monday sentenced nine of the 12 accused Catalan separatist leaders to between nine and 13 years in prison.

The 12 were accused of sedition over their roles in the region's 2017 failed bid for independence.

Several streets in Barcelona were also blocked by protests, including parts of Diagonal avenue, which crosses the whole city, local police said. There were also protests in several big Catalan municipalities, such as Girona and Lleida.

The independence leaders' sentences were lower than demanded by the prosecution - which had sought up to 25 years behind bars for former Catalan Vice President Oriol Junqueras.

"The Supreme Court has condemned Oriel Junqueras to 13 years of prison... on grounds of sedition and the misuse of public funds," the ruling said.

The three other defendants in the landmark ruling were found guilty only of disobedience and not sentenced to prison. All defendants were acquitted of the most severe charge, rebellion.

The separatists were charged for their role in organising a referendum on the secession of the northeastern region of Catalonia from the Spanish state in October 2017.
Top Stories