I Used Ransom From My Victims To Educate My Wife, Build Church, Mosque - Kidnap Suspect Confesses


A kidnap suspect has made startling confessions about his evil activities after he was nabbed by security operatives. 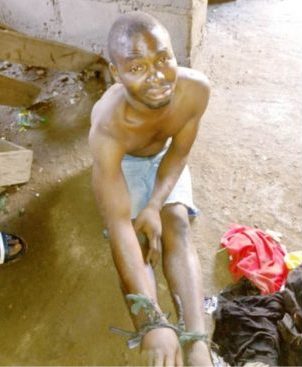 According to Daily Trust, the members of the Otunba Gani Adams-led Oodua People’s Congress (OPC), yesterday arrested a suspected kidnapper in Ibadan, the Oyo State capital.

The suspected kidnapper, who identified himself as Taofeek Lawal, said he hailed from Osogbo, Osun State.

Lawal confessed he had been engaged in the kidnapping business to sponsor his wife’s education in a higher institution in Ile-Ife, Osun State.

The suspect, who confessed that his targets were children between the ages of four and six years, said the ransom for any kidnapped child was N100,000.

According to him, he had successfully kidnapped three children in Osogbo and three in Lagos, and had sold his own child to take care of his family.

Lawal said his 15-man gang was working for politicians and a traditional ruler in Osun State whenever they needed their services.

“I have built two houses, a mosque and a church. I do take care of my family from what I do and my parents know about what I do,” he said.

The suspect further said that he had intended to quit the kidnapping but the said traditional ruler in Osogbo encouraged him to keep doing it.

He said he had been caught five times in Lagos and Osogbo, but that the traditional ruler in Osogbo was always securing his release.

An OPC official at Olaifa zone, Mr Babatunde Atiba, explained that the Congress got hint of the activities of the suspected kidnapper through a woman.

Lawal has been handed over to the Oyo State Nigeria Security Civil Defence Corps (NSCDC) for proper investigation and prosecution.